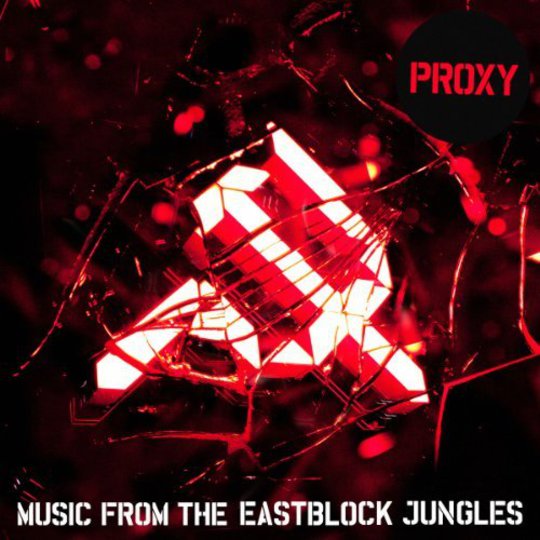 After making his name with ferocious Soviet electro tracks like ‘Raven’ and ‘Dance in Dark’, everything regarding one Evgeny Pozharnov went rather quiet. Whilst Pussy Riot have been taking all of the Russian music-based headlines, Pozharnov, aka Proxy, has been cut off in Vladivostok, Russian easternmost city, drawing together tracks both old and new for his debut album, Music From The Eastblock Jungles, presented in two parts.

Now, first up, let’s address the Russian thing. It’s hard to be objective once you already know the producer’s nationality, but there’s something about Proxy’s ominous, threatening soundscapes that seems inescapably Russian. Obviously that’s a ridiculous statement, but just as Oasis could never have come from Sussex, there’s no denying that you’d be hard put to make such menacing, dystopian music in Florida. From thunderous opener ‘Red Juke’ – a techno play on Darth Vader’s imperial march – to ambient closer ‘Nanomed’, there’s an unmistakably militaristic running through Music From The Eastblock Jungle, a darkness which invokes Russia’s recent history, its unforgiving climate, and all of the dystopian anti-communist prophecies which the West have ever hurled its way.

The album’s other dominant influence comes from the antithesis of the terrifying Russia of Eighties capitalist nightmares. It comes from Essex. As a small child, I was disproportionately terrified by the sight of Keith Flint, stomping around in a tunnel, shouting through the TV screen. Around the same time, Proxy must have seen the same video, and had a completely different reaction. Echoes of the Prodigy’s furious, synthpunk aggression can be found throughout Proxy’s work –particularly evident here on deep-bass romp ‘Raja Ganja’, lilting dub ‘In Time (Skit)’, and brooding rollercoaster ‘Shut Up!’.

The album’s two parts are clearly defined, allowing Proxy to thread together the various genres covered but still maintaining the record’s signature sound. Part I is broadly a dark take on traditional rave, with D'n'B, bass, and techno influences united by Proxy’s gritty, relentless production, whilst Part II becomes rather less bass-focused, but no less menacing, as thunders on through acid house, instrumental hip-hop and ambient influences. Though less bass means less tension, the tempo ramps up and intense, somewhat manic synths dominate instead, as on the jostling, aggressive ‘Indian Film’ (another pre-existing release) or the insinuating acid grooves of ‘Audio 15’.

And Proxy is evidently a man who believes reality to be just as dark as his music. In a pseudo-maniacal soundbite, presumably delivered as he towered over a captured superhero, cackling on a skyscraper’s roof, he dramatically states “You were never free from the inevitable. Perhaps now you will see”. It’s been well worth the wait, and this collection of hit releases, rarities and new tracks comes together to paint an evocatively grim picture of Proxy’s Russia.