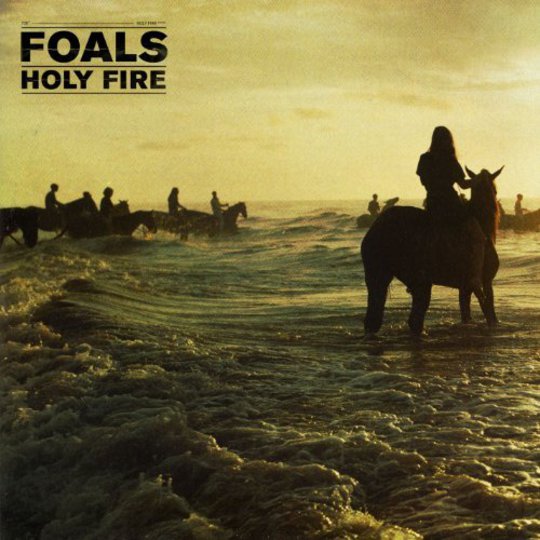 For a band who represent the antithesis of British indie’s lad rock heritage, Foals have always boasted ludicrous reserves of self-confidence. On their debut album, they dispensed with one of music’s most-lauded producers in Dave Sitek to release their own mix of the underwhelming Antidotes. The comeback single for its follow-up was ‘Spanish Sahara’, a six-minute churn of glacial angst which decimated any lingering hopes of a return to math rock.

Now they’re back at the third time of asking with Holy Fire, an album that has the audacity to liken itself to an Orthodox Christian miracle. This album needs to better the sagging second half of Total Life Forever and deliver from start to finish. It needs to deliver because if Foals can’t come good with the backing of Warner Bros Records, the collective goodwill of the UK’s music press and their own undeniable talent, then The Vaccines, Palma Violets and The Courteeners are all that remains. These bands are fine but if you want a force with mass appeal that’s more expansive, more intelligent and altogether more ambitious, then Foals feel like the last survivors of such a vanguard.

Thank heavens they haven’t fucked up.

Not only is Holy Fire utterly sublime, it’s a record that’s been six years in the making. A record where Foals have focussed their many triumphs and missteps into one cohesive statement. Trace ‘Inhaler’s surge of grungey scuzz back to its roots and you’ll find Yannis Philippakis screaming “cosine waves" as ‘Mathletics’ reaches its chaotic climax. Add a righteous wave of life-affirming positivity to ‘Miami’s searing funk and ‘My Number’ fizzles into life. Even ‘Moon’ is ‘Alabaster’ reincarnated as a more melancholic beast.

Foals have not reinvented themselves here. What they have done is refine their essence so that it can carry over 11 tracks. Holy Fire is deliberately paced in rhythmic waves which ramp up to a dizzying charge after the teasing ‘Prelude’. Cascading from the crunching thrust of ‘Everytime’ to the artful swirl of ‘Out Of The Woods’, the effect is to be caught in a perpetual state of breathless ecstasy. When this rush abruptly subsides with ‘Stepson’, its blissful comedown is all the more stirring. Especially since Philippakis’s lyrics have come a long way from the scattershot nonsense of ‘Balloons’ and The French Open’. Syllables still frantically drip from his tongue, thankfully they now all fall into place. Not least in the refreshingly intimate ‘Bad Habit’, “I made my mistake and I feel something’s changed. Wash the stains away and I feel quite okay.”

If Holy Fire is a redemption story, then its conclusion is all the more tantalising. Having spent three albums honing their current guise, the only way forward for Foals is to rip up what’s gone before and start again. For now, their long-standing swagger is finally justified. Time to bask in its reflected glory.