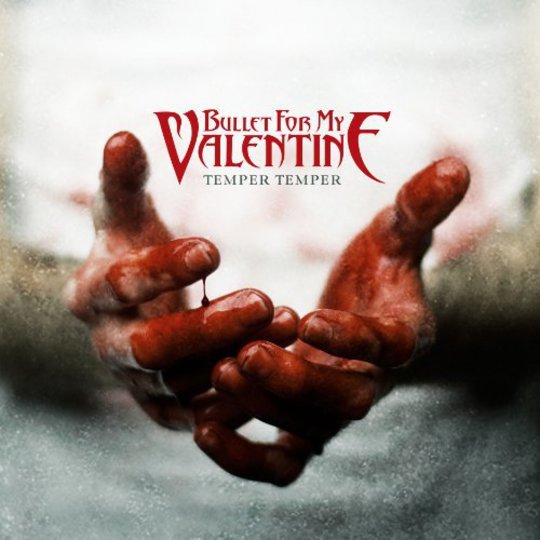 Upon hearing the first two singles from Welsh metal stalwarts Bullet For My Valentine's fourth full-length Temper Temper, I feared the worst. The title track's video features angry Tapout t-shirt wearing gym abusers, Front magazine rejects and Roddy Piper circa 1988 wearing what looks like baby-blue Tupperware on his head battling it out at an anger management class. Baseball bats are wielded furiously, filing cabinets ransacked and bottles smashed over heads, as a desperate counselor tries to calm his motley crew of camera friendly alternative types with breathing exercises, before losing the plot himself and gleefully joining in the carnage.

Throw in some gratuitous, incongruous shots of the Stars and Stripes (when was the last time you saw an American metal band waving The Red Dragon?) and you have a music video that tactlessly teases out the worst elements of the song; chiefly its crap machismo and adolescent subject matter. But when separated from its video and placed within the context of the album, 'Temper Temper' feels far less like puerile, angst-ridden drivel that should never be heard outside of an MMA gym in backwoods Alabama, and more like enjoyable, catchy filler.

Unfortunately, 'punky' second single 'Riot' doesn't fare as well; it's still terrible when listened to independently of its visual accompaniment and the schlocky chorus of "here come the sirens, here comes the law, run from the sirens, run from the law" is lazy even by BMFV's standards. The good news is that 'Riot' is the nadir of Temper Temper; the remainder of the album is composed of their familiar brand of anthemic pop-metal, complete with Himalaya-huge choruses and searing guitar solos.

'Breaking Point' and 'Truth Hurts' both race out of the stalls strongly, but fourth track 'P.O.W.' is where Temper Temper really begins to shine. Shamelessly mining the same vein of robust, anthemic alt rock the likes of Young Guns have built entire careers upon, it's a slight, but successful stylistic departure for the band. 'Dirty Little Secrets' is a scathing lament to an unfaithful former lover and 'Dead To The World' is a slow building power ballad that follows the blue print laid down by Metallica with 'Fade To Black' almost two decades ago.

The best is saved for last. If you're apprehensive that BFMV may have sullied the reputation of their finest song by writing a poor sequel then all doubt should be quashed as Matthew Tuck screams "let's go again" during the opening minute of 'Tears Don't Fall (Part 2)'. And if you’re still not convinced by the time he's singing "I've told you before, your tears don't fall" during the song's uplifting, glorious final coda then you’re not alive. Ultimately it is telling that the best song present here is a re-imagining of a previous smash. But leveling criticisms of unoriginality or lack of innovation and evolution at bands like BMFV is almost redundant. They're judged on the size of their hooks and in that department Temper Temper largely delivers.