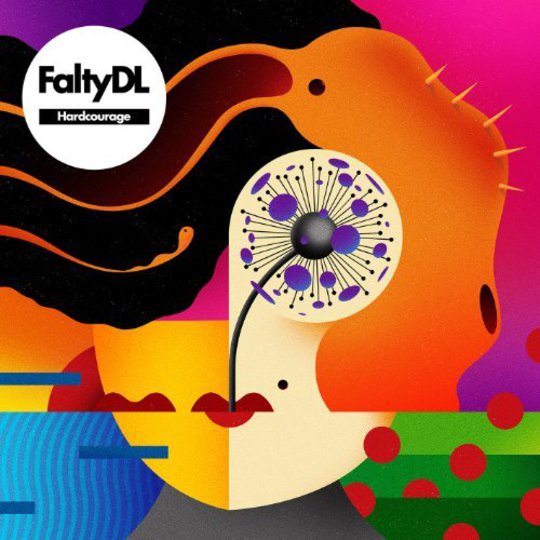 A native New Yorker who’s long lingered on the London scene, producer FaltyDL has quite the enviable CV. Two LPs through Planet Mu, accompanying singles, and EPs with Swamp 81 and All City Recordings. He’s opened for Radiohead, remixed everyone from the xx to Scuba, and as a result can boast B-side remixes from Mike Q, Gold Panda and Four Tet on his new album Hardcourage. With his genre-jumping list of collaborators, it’s perhaps unsurprising that the man himself, Drew Lustman, finds it hard to sonically pin himself down, resulting in a distinct sound which blends house, techno, and UK garage alongside myriad less distinct influences.

On his latest full-length, his first with London’s Ninja Tune, Lustman has edged away from his normal sound, an American spin on UKG, and has instead embraced the styles of minimal house and soul-referencing electronica. Hardcourage is a consistently upbeat, uplifting record, often openly displaying the high-flying passions of a man who’s fallen hard and fast – it comes as no surprise to hear that it was inspired by a new love and muse, a soundtrack to falling in love that Lustman didn’t originally intend to give a public release.

It is at its highest peaks of emotion, at its most vulnerably honest that Hardcourage is most affecting. With ‘Straight & Arrow’, Falty starts off in a fairly generic rave-house gear, but as the beat is layered with squelching synths and a jittering chopped and filtered vocal, it swerves into territory not dissimilar to Jamie xx’s reworking of Gil Scott-Heron as the sample flickers over the shuffling, ponderous house beat. On ‘She Sleeps’, Lustman is joined by Friendly Fires’ Ed Macfarlane, whose beautifully silky descant soars over a gorgeous, post-coital utopia composed of thudding sub-bass and loose hi-hats; a clever combination of indietronica and smooth, minimal house. On perhaps the most conventionally 'FaltyDL' sounding track on Hardcourage, ‘Kenny Rolls One Up’, the mood remains assured and content, with a sunny break-beat and warm, washing fuzz backing euphoric synth stabs and more trademark loose hi-hats.

At the risk of sounding inadvertently Fifty Shades Of Grey, the album’s chief charm is its tight-rope balance between airy sweetness and determined, insidious force. For alongside the shameless, loved up electronica lie a few darker tracks, like post-dubstep ‘Uncea’ and ‘Finally Some Shit/The Rain Stopped’ – an unusual mix of heavy bass, barely audible incomprehensible spoken samples, and pitter-patter percussion, which sounds as if it was created with all those satisfying, weird little instruments from primary school, graters and shakers alike. The outright, quasi-religious euphoria and the underlying determination come together on ‘Bells’, whose looping angelic synths crescendo into slinky sax and wheeling violins over a thudding, glitch-laden beat. It’s like Crystal Castles playing a Valentine’s Day set.

From its artwork to its influences, Hardcourage is an evidently retrospective album, revelling in its references to all kinds of forerunners. Thanks to Falty DL’s wide-ranging tastes though, the unusual combinations come together to make something uniquely his. A record for bedroom chilling that has more than enough clout to slot into dance floor sets, it’s a refreshingly vital take on the heavily worked over source material.