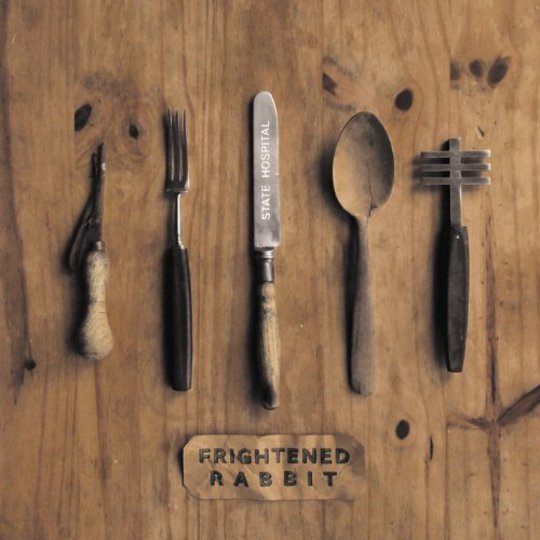 A significant part of me doesn’t want to press play. Two years on from The Winter Of Mixed Drinks, this five-track EP is Frightened Rabbit’s first proper release on a major label - Atlantic Records, who signed the band in 2010. The fear is palpable: we all heard what happened to Death Cab.

And sure enough, mere seconds into the title track and there’s the body of a rabbit dead at the side of the road I'm driving on, its expression sad as its innards leak onto the tarmac. This can’t be a coincidence, I think, listening out for the death throes of a band I love, the final rattle as they exhale their last into an expensive studio setup whilst executives in anonymous suits circle the edges just laughing with their heads thrown back.

But it never comes, that rattle: three, four listens in, and it’s nowhere to be heard. Instead State Hospital is the sound of a band renewed, invigorated and impassioned and pretty damned far from selling out. A recent interview had singer Scott Hutchinson commenting on the biggest change, a shift in focus to all five members contributing to the songwriting: 'We have written a band record,' he said. 'It used to be just me but I was repeating myself.'

Not that this strays far from Frightened Rabbit’s established template: soaring choruses and driving lead, drums echoed and high in the mix behind emotive narratives of love and violence and regret. It’s less folksy than last year’s A Frightened Rabbit EP, a touch more experimental in the textures that surround the songs - the broken scrape behind the verses on 'Wedding Gloves', the glitching tape loops of 'Boxing Night' - but this segues without jolt from where the last album left off, the closing beats of its final moments deftly recalled in 'Home From War’s clattering fade-in.

But it’s the title track that’s getting most attention, the only cut here set for inclusion on whatever full-length emerges in the months ahead. And it acts as a magnificent trailer, stirring and anthemic and yet strikingly intimate and incredibly sad, a showcase of songwriting and musicianship that deserves all the exposure it gets. But more striking still is the strength of the four tracks that follow: certainly there’s nothing here that betrays a second-tier status, the good-but-not-quite material too often consigned to the recesses of EP runtimes. Highlights are everywhere, from Hutchinson’s voice cracked and breaking at the close of Home From War to the percussive understatement of Off, although for many it may be the appearance of Arab Strap’s Aidan Moffat, lending a gravelled poetry to closer 'Wedding Gloves', that proves most stirring.

“This is a collection of songs that for one reason or another did not fit on the full-length record,” say the band of this release, keen to preempt any suggestion that these may just be the castoffs, the bloody matter that surrounds the new birth. But even if they were, these 20 minutes are of a higher quality than many, many bands manage in a whole career.

Incidentally the next day, driving that same route and again listening through State Hospital, louder this time and the dread long since past, and the rabbit corpse is no longer there. Sure, it may have been dragged away by a fox and torn apart in some crumbling den, but I’d much rather the slightly desperate symbolism, fitting as it somehow seems.