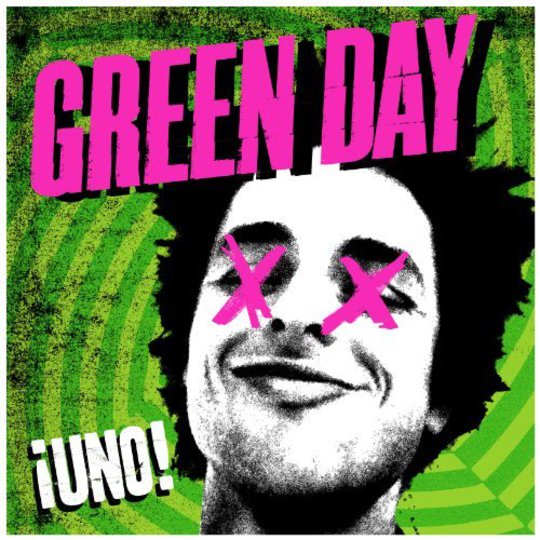 ”What ever happened to the teenage dream?” asked Seventies glamour pixie Marc Bolan, a question Green Day have been trying to answer since the turn of the millennium. Finally, after spending two albums pondering the nature of disavowed, disenchanted post-modern youth to lucrative, if occasionally dry effect, they’ve stopped dissecting that dream and started celebrating it. ¡Uno!, the band’s ninth album and the first of a trilogy, is a 45 minute power-pop valentine to the adolescent experience, and the least seriously the world’s biggest punk band™ have taken themselves in nearly two decades.

‘Nuclear Family’ kicks things off nicely, a proper bubblegum-punk stomper with Billy Joe Armstrong declaring he’s ”Gonna ride the world like a merry-go-round.” It’s an apt introduction to a record that, at its best, is bursting with the joy and bullet-proof confidence of a drunk 17-year-old, taking on the universe and knowing they’re going to win. This is a collection of songs steeped in first loves, broken hearts, fights, booze, dances, school reunions and one night stands, played by a band channeling their teenage selves, the snotty punks of 1990’s 39/Smooth, with nods to the best teen-music ever made: Fifties and Sixties garage-pop. It’s a shrewd mix, giving the likes of ‘Angel Blue’ and ‘Sweet 16’ a real nostalgic sting. It’s a shame John Hughes isn’t around anymore, because most songs here could easily fit the smarter end of his output.

Few are more qualified to document the teenage experience than Green Day - they were barely out of their teens themselves when they helped pull a generation from post-Cobain malaise with 1994’s Dookie and its instant classics about boredom, anxiety and wanking, a perfect summary of the mid-Nineties teen experience that was at one point owned by just about every 14-year-old in the western world. They managed it again a decade later when every 14-year-old in the western world owned American Idiot, the trio's rock-opera about, again, bored and alienated youth. But the teenage dream has never really been enough for them. Ever since they hit the mid Nineties alt-rock megaload, Green Day have been trying to prove they’re more than a three-chord party machine, each record has seen an obvious, sometimes forced musical evolution, each record looking to be more ‘grown up’ than the last, with occasionally brilliant but occasionally jarring results. ¡Uno! finally sees the Cali-punk trio letting themselves sound like Green Day, releasing the pressure and defaulting to what they do best. Maybe they feel they’ve pushed the envelope far enough, or maybe releasing three discs in quick succession means they have the room to knock about a bit. Maybe a band entering their third decade simply doesn’t have to prove themselves anymore. Whatever the reason ¡Uno! is the sound of a group settling back and enjoying themselves.

Occasionally they do miss the mark. Closing song and first single ‘Oh Love’ is too close to the plodding 21st Century Breakdown album to be exciting, it’s an uninspiring introduction to a much fresher sounding record. Then there’s ‘Kill The DJ’, a lyrical and musical trip to the disco which ends up sounding a bit like Franz Ferdinand and will certainly split opinion among fans. Missing are the megawatt anthems Green Day are usually very good at - nothing here will be joining ‘Basket Case’ and ‘American Idiot’ in the rock clubs of the future. It’s all a little slight, but that’s really part of the charm, reveling in its disposable pop.

It’ll be interesting to see where albums ten (¡Dos!) and eleven (¡Tres!), due in November and January, will take things. Three discs of pogo-friendly high-school punk could get a bit wearing - a smarter move would be to keep things maturing and moving, with the triple album concept allowing Green Day to be every version of themselves they want. Time will tell, but for now this 45-minute-blast of supercharged rock n’roll will do nicely.