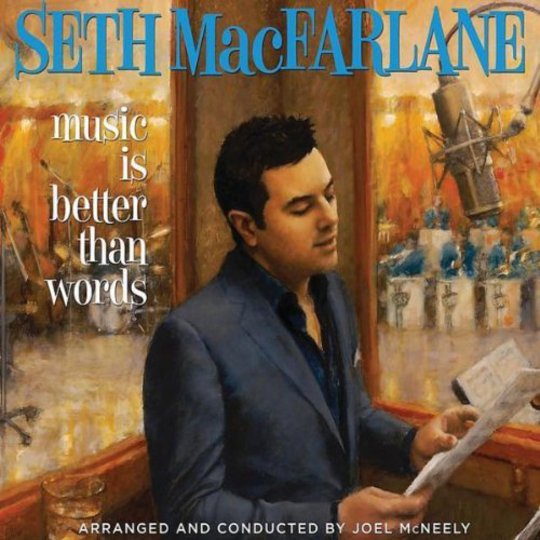 Back in the 1990s an ambitious writer/animator had a dream. He would create a cartoon series following in the footsteps of The Simpsons, South Park and King of the Hill. Casually eschewing the intelligence of these predecessors, the sitcom's lowest common denominator crudity would prove monstrously successful. Family Dad would run for three seasons before being cancelled by the Fox network, then resurrected thanks to mass DVD sales and internet campaigners who could not live without its coarse jokes and unique characters such as a baby that can talk and a dog that can talk.

Recommission would give its creator greater power, less censorship, and further freedom to gleefully attack political correctness, employing shock tactic 'risqué' humour designed to appeal to its audience who tuned in to revel in being shocked even though they knew exactly what to expect and therefore weren't really being shocked at all. It would spawn a vaguely political sister series, American Guy, featuring a fish that can talk and an alien that can talk and spin-off show about an African American family written by a bunch of white people and featuring a bear that can talk (The Cleveland Steamer).

Soon the silver screen would beckon. He would write, direct and star in a movie about an immature loser and his unlikely best friend, a bear that can talk. Having conquered all these territories and firmly established his media empire, then and only then would the true intention of his diabolical plan be revealed in all its horrible glory. He would unleash his own album of big band era cover tunes.

Who on earth is this album for? Those of us who relish the sound of wax-faced celebrities with impossibly bright teeth crooning their way through the hits of yesteryear but can't hold out for the next John Barrowman record? Those who applaud the musical interludes of Family Dad but wonder what the same voice would sound like without the AIDS gags and anti-Semitism? Is it an attempt to appease some ageing member of the MacFarlane clan who has never fully accepted Seth's career in animated puerility? Really this album is for one person and one person only: Seth MacFarlane.

In spite of his achievements at putting sounds into the mouths of drawings, MacFarlane's singing voice has no more character than your average cruise ship singer, budget Frank Sinatra impersonator, or Robbie Williams on Swing When You're Winning. The only positive here is that the listener might be inspired to investigate better versions of such tunes performed by superior singers. 'Anybody's Spring' withers next to Bing Crosby's version because MacFarlane's voice is not as rich. Similarly, 'Anytime, Anywhere' withers next to Frank Sinatra's version because MacFarlane's voice is not as rich. 'The Sadder But Wiser Girl' has none of the power or passion of Robert Preston's turn in The Music Man (which sublimely verges on controlled shouting). Comparatively, Seth's flaccid attempt to 'belt out' the number only emphasises that he's struggling. The song choices themselves are also dubious. 'Something Good' is hardly the most exciting tune in The Sound of Music and performing it solo instead of as a duet strips it of its intimacy and accentuates its blandness. Not that Norah Jones or Sara Bareilles add much in the way of sexual chemistry when they turn up elsewhere.

It also takes substantial effort on the part of the listener not to picture every line being sung by a cartoon dog that can talk. I found the best way to combat this problem was to hold the album cover directly in front of my face for the duration of running time. Unfortunately, MacFarlane’s smug, bright-toothed wax face is now burned permanently onto my retinas. His image is literally everywhere I look and it is driving me quite, quite mad. As I type this very sentence, his blurry, bobbing head stares back at me from the centre of my screen as if goading me to compose harsher criticism than such a harmless karaoke album really deserves.

This is an utterly pointless record with no artistic merit, creative spark or genuine ambition whatsoever. It is a narcissistically misguided vanity project that should never have escaped MacFarlane's imagination. Satirists are supposed to prick the pomposity of such arrogant and empty enterprises, not engage in them themselves. Music Is Better Than Words? I can think of at least two words infinitely preferable to the culturally superfluous guff to be found here. They are 'eject' and 'button'.