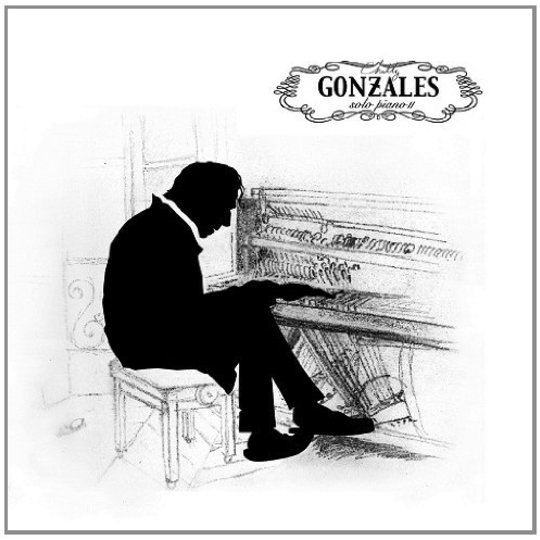 At almost three centuries old and five to nine feet in length, the piano flies in the face of musical progress. In today’s world, grubby 16-year olds etch together sounds from the bowels of their bedrooms. It doesn’t matter what they play or how they play it, all they need is a knack for GarageBand and an ear for a bit-mapped beat.

There’s little room for the piano in this get-the-hits-out-quick blueprint. The music industry simply doesn’t have the time or money to create the optimum ambience for tinkling ivories. And, really, is there anyone in 2012 who has the attention it takes to coax wistful notes from this behemoth instrument?

Having worked his magic for Feist, Peaches, Daft Punk and, er, Steve Jobs, Gonzales’s mastery embraces a gamut of styles that runs from hip-hop to classical (sometimes at the same time). Yet, his first full length fling caressing the ebony and ivory keys, 2004’s Solo Piano, was a much-lauded revelation. Its instrumental laments took Gonzales beyond alternative audiences and hurtled him into more mature musical ears.

Eight years and one Guinness world record later, the Canadian enigma has plumped himself back on the stool, popped open the fallboard and recorded another batch of grand piano songs. Assembled from the rubble of hundreds of melodies, Solo Piano II is a natural, if more jaunty, follow up to its predecessor. These 14 cuts are classily sculpted; each delicate and nimble, entwining emotional notes and fluttering melodic jaunts.

Such meshing of ambience shapes Solo Piano II into a rewarding listen. Rather than compliment ‘Escher’s cascading keys, down-tempo numbers like ‘Minor Fantasy’ and ‘Redeaux Lunaires’ create a wave of intermingling peaks and troughs. Yet, Gonzales is streetwise enough to let his work live independently, with softer compositions like the bewitching ‘Evolving Blinds’ easing out engrossing melodic yarns.

At times this richness feels more suited to aristocratic lounge rooms, but there’s enough personality here to captivate a wider audience. Nodes of candle-lit tenderness leap from the tearful swells of ‘Othello’; a smokescreen of fidgety key strokes disguises the heart-breaking tenderness of ’Epigram in E’; while hints of charming cheek lies in ‘Nero’s Nocturine’s dainty and familiar tune.

Recorded over ten days in Paris’ Studio Pigalle, Solo Piano II’s classical leanings and modernistic execution are testament to the piano’s ever-lasting ability to dazzle the masses. And with it, Gonzales proves once again that makeshift beats and bleeps are little match for his extraordinary craft.