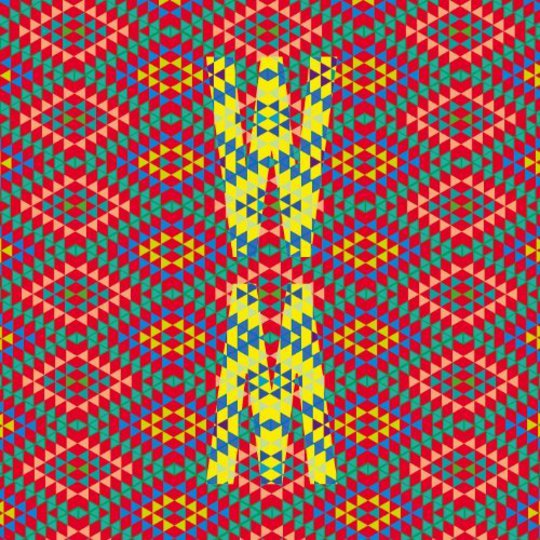 Rocket Recordings must be a happy label right now. For 14 years it's, have been trawling the neglected underbelly of psychedelic rock in all its branches, taking on the role of a street pulpit-standing prophet, dragging anyone who come near by the shirt lapels, banging them up against a wall so the cement dust beds in their hair and imploring them to listen to the latest Gnod or Ufomammut record - even when trends and fads and whimsy has meant many have looked the other way instead. Now, though, you sense there’s a sea change; look and listen to those who appeared at this year’s Supernormal festival and who are playing Liverpool’s forthcoming Psych Fest and the evidence is that a new breed of explorers of the outer paradigm are coming forth and, more excitingly, finding an audiences for their wares. It’s a pretty good time, then, for Sweden’s Goat to enter the UK fray with their debut LP World Music.

Indeed, there’s a sense for Rocket Recordings that, following years of shouting into the void, they look like they’ve finally really hooked one: Goat arrive from Sweden with interest rapidly building, with both a 7-inch and a small cassette run selling out rapidly earlier in the year, a generous presence on the blogosphere and an overall momentum that equates – to put a dull employer sort of stamp on it – to the sort of CV that newly-signed Rocket bands have rarely previously had.

Their back story is, at worst, gloriously entertaining hokey and, at best the sort of passed down folklore that fizzles with magic and mysticism, an almost alien tale among 2012’s relentless search for answers in black and white. Korpolombolo, where Goat reside, is in the north of Sweden; it’s apparently a place that, for centuries, was a haven for voodoo worship, the result of a travelling witch doctor who just happened to be passing thanks to the directions of an ancient scripture. This came to an abrupt end when Christians discovered these pagan rituals and burnt the locals for witchcraft, placing a curse on the settlement that Goat say survives to this day.

Still, if they’re letting such fears bother them, then it doesn’t show on sprawling upbeat jams like ‘Disco Fever’ and ‘Golden Dawn’, tracks that give themselves to the reed thin guitar and syncopated rhythms of afrobeat, evoking a freedom of spirit that snakes its hips in defiance against the anguished shrieks of their ancestors. ‘Let It Bleed’, meanwhile, crosses continents completely in its part-tribal paean, part funk odyssey, sweating from the hottest New Orleans humidity. There’s also a very primal sense at play; songs like ‘Goatman’ and ‘Goathead’, two colossal tracks that sit back to back, are built atop great big slabs of bloodshot-eyed guitar and tribalistic chants. Way back when The Stooges started out in 1967 The Psychedelic Stooges, they were known for playing rough, marijuana-induced improvisational sets as otherworldly as they were heavy – you sense they might’ve sounded something like this as six-string ripples like whipped rope.

In the very few interviews the band have given thus far, the inclination has been that they’re travellers by nature and, whether by broadband connection or footwork, they’ve conjured a vast multitude of touchstones here. More impressively, though, is how they’re tightly packed and cohesively woven into the fabric of one another, as opposed to the group jumping loosely between sonic souvenirs. Occasionally that does let them down. For a group whose palette is clearly so broad, the comparatively limited array of sounds used to bring it together, coupled with a largely constant tempo that never quite fully stretches its wing span, means that peaks and troughs in dynamic and tone are rarely found, the band bringing out all their various exoticisms from the off. There is one sharp shift, and it’s great, ‘Goathead’ suddenly disappearing in a cacophony of noise and leaving behind its shivering, naked riff on acoustic guitar, a rare moment of fragility amidst this ferocious aural land.

‘Det Som Aldrig Förändras’ is the album’s final mind-bending finale, meaning in English 'it that never changes'. They prove that to be true by segueing back into the opening track ‘Diarabi’, the circle complete. World Music is pretty much just that, a wonder through the traditional folk and more amplified sounds of the planet’s history, yet infused with enough of Goat’s own character to all glue together. Whether they’re travelling shamans becomes irrelevant to the point; the music alone possesses enough magic on its own to captivate.