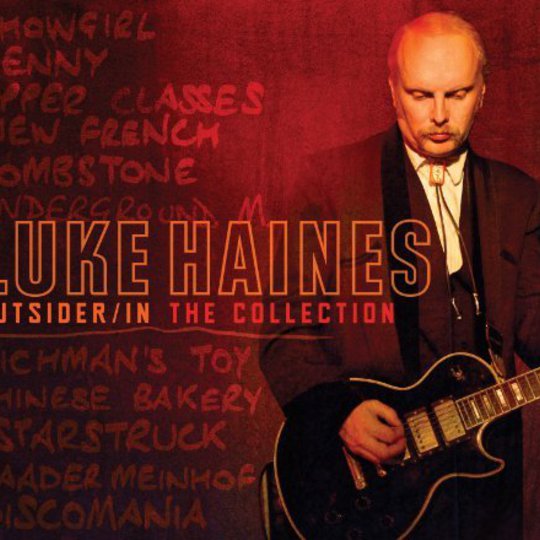 The slightly naff title of this budget two-disc Luke Haines compilation suggests that following the success of the old grouch’s very funny books, the time has come for a reappraisal of his music by the mainstream. I couldn’t agree more. The Auteurs are possibly the most what-if British group of their era. Imagine if Blur had tanked after Modern Life Is Rubbish or Suede folded after Bernard Butler left. Okay, the Auteurs made it to three albums – How I Learned To Love The Bootboys being a Haines solo effort in all but name – but there’s definitely a sense of unfinished business to their oeuvre. Fed into the increasingly desperate hype machine of the early Nineties weekly music press too early to properly catch the wave that became Britpop, by the time that wave crested, Haines’s muse had steered so far from the shipping lanes of commercial acceptability that it seemed as if she were deliberately trying to sabotage his chances of opting for early retirement. Unsurprisingly, from our vantage point 15 years later the Steve Albini-produced After Murder Park and the eponymous Baader-Meinhof album stand among Haines’s best work, but it was around ’96-’97 that most commentators not unreasonably wrote him off as forever destined to wear the cult hood.

And so here we are, give or take a Black Box Recorder (for the second time unrepresented on a Haines compilation). If you’re already a fan then you don’t need either this review or its accompanying album, so I’ll address the former to an imaginary reader who – like myself three years ago – has grinned her way through the hilarious savagery of Bad Vibes and wants to find out whether Haines can walk the walk as well as he talks the talk. In a world that still – inexplicably – lacks a straightforward one-disc Auteurs best-of, the only competition Outsider / In faces is Hut/EMI’s three-disc Luke Haines Is Dead extravaganza (2005), still available for slightly more than twice the new compilation’s modest asking price. In terms of raw quantity, the new one represents better value (18p per track as opposed to 22p, or roughly 5p per minute versus 7p, fellow autists). And in one sense the quality’s not an issue: I’ve yet to catch up with a couple of his post-Auteurs albums, but – silly remixes aside – all the evidence I’ve heard suggests that Haines doesn’t 'do' weak tracks, which simplifies the compiler’s task considerably.

In another qualitative sense, though, I’d suggest that the Haines-curious opt for Luke Haines Is Dead. While both compilations have the 'hits' (or lack of them) amply covered, LHID tends to go for alternate versions: single mixes, radio sessions, you know the kind of thing. The doozy of these is the April ’94 live Radio One Evening Session broadcast, whose versions of 'The Upper Classes', 'Chinese Bakery' and 'New French Girlfriend' piss gleefully all over their studio counterparts, and there’s plenty else to go at. The average Auteurs B-side, for example, is better than many acts’ entire output. Now, in the parallel universe where the Haines-curious gives whichever compilation a cursory listen and thinks 'well, there you go, Luke Haines: not bad, quite interesting' before getting back with the Killers, this wouldn’t make an awful lot of difference to anything. But in yer actual extant universe – the one in which few songwriters rival Haines for melodic and lyrical invention or lack of stylistic complacency – it’s only a matter of time before she sets about acquiring his entire back catalogue, so she may as well save the 'canonical' versions for later and hear them in the context of their parent albums. Oh, and LHID has considerably wittier sleeve notes from Haines, whatever you think of the Paul Morley-on-autopilot ones here.

Lest anybody mistake this for a (sorry) lukewarm review, I’ll break with DiS etiquette and 'award' Outsider / In a whopping nine gold stars, for emphasis, the missing one serving to indicate that where Haines compilations are concerned there is such a thing as even more superlative.