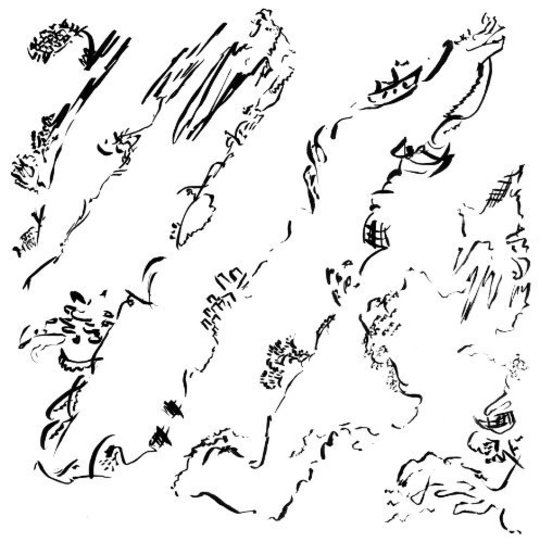 For a long time I missed the inherent pun in Blues Control’s name. Until two weeks ago, I’d thought that their shifty sounding moniker was a reference to their sound: they wanted to tame those wild, wild blues, their gloomy bedroom pyschedelia being reflective of this misconstrued aim. Then, halfway through the opening track to Valley Tangents, the sprawling spaghetti western chords of ‘Love’s A Rondo’ gave me an ephiphany: Blues Control are a band who care little for haste. It’s all in the name: Lea Cho and Russ Waterhouse are happy enough meandering along; they prefer to cruise, rather than go pedal to the metal.

Funnily enough, for a band that seem to relish the slow life, Blues Control have been oddly prolific, flying under the radar dominated by their contemporaries and admirers which include Kurt Vile, Cameron Stallones (Sun Araw) and Wooden Shjips. Valley Tangents is their fourth record proper and adds Drag City to the band’s already impressive list of labels: as if Siltbreeze, Woodsist, Holy Mountain and Not Not Fun wasn’t an impressive enough list for a band that has now been going a surprising six years. Valley Tangents comes a full three years after the recording of the band’s last proper piece of work, and the first since they’ve decamped to the country from their original spawning ground of New York. Having been so long in gestation, the band, ever on the fringes of the touring underground as it was, are probably just about as invisible as they’ve ever been.

Which is a shame, as Valley Tangents feels like something of a milestone. It’s more restrained, better produced (or less self consciously lo-fi?) and surprisingly refined. And, like previous records, it’s more of a tortoise than it is a hare. The duo’s basic formula remains generally untouched: Cho lays down swampy, kraut-ish keyboard loops as Waterhouse walks his guitar up and/or synth and down the track in question, creating a pulsing, jammy and lazy pyschedelia that sounds like it was recorded under Martin Sheen’s whirring ceiling fan in Apocalypse Now. But on Valley Tangents, they add a wrinkle or three: be it a wandering classical piano flourish, a skywards heading Ry Cooder-esque guitar solo, or a pure hazed funk lick straight from the book of Sly and his Family Stone. Throw in the fact that renowned percussionist and polymath Tatsuya Nakatani adds some actual live drums to two of the tracks here (‘Love’s A Rondo’ and ‘Iron Pigs’) and it’s hardly a surprise that Valley Tangents shows that this band can straight out play: something that might not have been entirely evident to the casual observer exposed to their prior output.

Blues Control haven’t forgotten their jam-centric origins, but here the jams don’t so much run free, as hunt in organised packs. ‘Iron Pigs’ takes a stomping bassline and weds it to sparkling guitar lines, Waterhouse teasingly playing call and response, first with himself and then with his bandmate. ‘Opium Den/Fade To Blue’ is ‘classic’ Blues Control, coming in somewhere between Future Days-era Can and something altogether more unexpected, trilling arpeggios or chord from Cho penetrating the murk. Album closer ‘Gypsum’ is as close as the band come to a real freakout, a languid bassline unwinding into something altogether more cosmic, before the track disintegrates under frenetic stabbed chords by way of an eastern themed interlude.

Yet what really stands out, even after a dozen listens is penultimate track ‘Open Air’. That it’s about as far removed from the slow scuzzy blues of the band’s last proper output (the Kurt Vile-featuring Local Flavor EP on [who else but] Siltbreeze) as humanely possible certainly has something to do with this. The album’s first real sound of tape hiss is accompanied not by a barn-storming riff, but quietly echoing piano, dropping in and out as though heard through a set of revolving doors. It’s impressively refined, out-there whilst remaining in touch with the band’s key elements and ethos, and serves as a perfect summary of Valley Tangents as a whole: a carefully considered, exotic and mature record that stands out as a blueprint of how to handle the move from lo-fi to, well, just –fi. Blues Control might not blow past you at a hundred miles an hour, but don’t let them lull you into a sense of false security. At half the speed of most of their garagey former NYC contemporaries, they’ve produced a better album than most will ever muster.