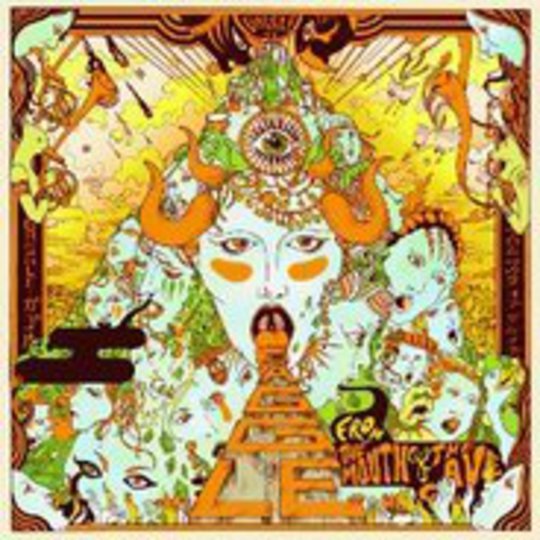 East London collective Gaggle may have been dismissed by some as a novelty act, but if From The Mouth Of The Cave, their long awaited debut long player is anything to go by, they're possibly one of the most unique musical ensembles plying their trade at this moment in time.

Formed in 2009 by Deborah Coughlin and Simon Dempsey - formerly of indie outfit 586 - the all-girl choir whose numbers usually veer anywhere between 15 and 23 (most of Gaggle hold down full-time day jobs) have been regular fixtures on the UK festival circuit for some time now. Although not svengalis as such, Coughlin and Dempsey's roles as arranger and songwriter respectively shouldn't be underestimated. However, when all's said and done, the final judgment call will be made on how the record sounds, and for the most part here, Gaggle have more than exceeded expectations.

While a handful of the songs here will be familiar to anyone that's seen them live - 'Crows', 'Bang On The Drum' and early b-side 'Liar' - the level of orchestration that's gone into perfecting the studio versions justifies the time its taken for From The Mouth Of The Cave to finally see the light of day. Aside from the multi-coloured stage wear, sloganeering and gender politics, Gaggle ably demonstrate that they're a force to be reckoned with. Although comparisons with the likes of The Polyphonic Spree are inevitable, there's enough complexity and variation throughout 'From The Mouth Of The Cave_ to suggest both band and album are no flash in the pan. Certainly this should dispel the novelty myths once and for all.

Evidently dark in places, as on the title track where the sound of a church organ and what could be horses' hooves introduce the record, lyrics like "Come with me...or I'll leave you to die" disprove any notion Gaggle are having a laugh at someone else's expense. Building uncontrollably into a mantra like chant, 'From The Mouth Of The Cave' admirably sets the scene for all that follows.

Lead single 'Army Of Birds' could be the second coming of Adam And The Ants (Kings Of The Wild Frontier-era of course) if they reformed as an a capella combo. Fusing hip-hop beats with chants about wanting to make dreams come true, it's possibly the heaviest, and certainly most direct piece of music Gaggle have put their names to so far. "I hate the power of money, making people rich or poor" they declare over a concoction of dub heavy bass and earth trembling beats on 'Power Of Money'. Again, one of the longest surviving staples of their live show, the studio reworking here transforming it into something resembling The Slits had Geoff Barrow been on production duties.

The deceptively titled 'Happy Is The Country' throws another curveball into the mix, coming on like a wired Raincoats or less distracted Au Pairs. 'Gaslight' too could have been recorded anytime between 1980 and the present, such is its tendency to switch from dub-infused polemic to loose, minimal lo-fi at the change of a verse. While the minute-long interlude 'Congo' dissects both 'Liar' and 'Bang On The Drum', the latter's epic propensity still evident from those early shows where it stood out as the band's piece de resistance. 'Crows' too combines sweetness, simplicity and aggression throughout, in contrast with the eerie 'Lullaby', where a child's music box plays over inquisitive gestures cum poignant statements ("Will you take good care of me?") galore.

"There's no way we'll change" insist Gaggle for one and all on the truculent fanfare 'Hello Spider', its deceptive piano intro giving way to a colossal finale. Album closer 'Leave The City' once again turns to a concoction of processed beats and loud orchestration to convey its message, taking From The Mouth Of The Cave to a natural conclusion.

Reference points aside, Gaggle can be unashamedly proud of their first long player, not least due to the fact it brims with an authenticity and uniqueness sadly lacking with many of their present peers. Furthermore, any question marks over whether they're a serious musical concern or novelty circus act are well and truly answered. Astute in every possible way...