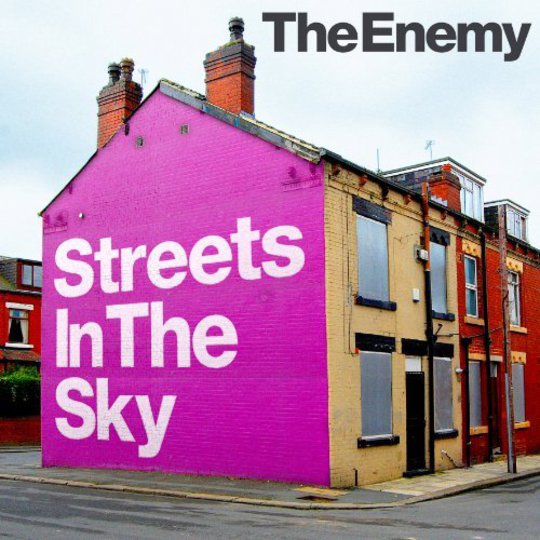 The un-music.The abyss staring back.

Fifteen minutes into the third album from The Enemy and already I'm feeling dangerous. I feel sulphuric. I am a creature. I am a planet killer. My nice Italian flatmate is singing in the next room and all I want to do is hurt him. If I strangle him, say, I will probably cry throughout. SOS, Mayday, Tom Clarke is screaming but no one is listening. I wave from the shore. I feel as though I've been left alone with you, Clarkey. This is a low point in British guitar music. For pity's sake, deliver us from evil.

So blank, so generic, it's borderline abstract. A dreamy alienation afflicts you on first listen. It is end times for this type of music. 'Ladrock'. Exhausted in its first seconds of recycled existence and exhausted ten generations on.

When did the term 'working class music' become a front for taking art out of the equation? Joy Division, The Specials, the Manics, The Fall, The Human League, Minutemen... this is a betrayal of their legacy, the enemy of imagination, of D-Boon's dedication to art as “a way to learn about the beauty of the world,” perpetuating the myth that the working classes have no right to have culture in their lives. Or worse... no inclination, or worse - no capacity for it. When did “We're just normal lads, us” ever had anything to do with it? When did unconstructed mundanity equate to honesty; 'the truth'? Oasis, Weller, Stereophonics, you created a hell on earth. You patronize your target demographic. Shame on you.

So linear. So staggeringly unmusical. So preternaturally inexpressive in its rigidness. One eternal note of impotent strain. One kind of beat. One kind of guitar sound. A reoccurring nightmare. Its gummy jaws close tenderly and you think of nothing.

Tom Clarke changes his songs half way through, invariably two different times. Air escapes from every crevice. The ugly things creak with the stress of slow redirection. Throughout idling verses he will alternate his vocal melody in miserable synchronisation with his guitar, as it slops back and forth between two chords of grunting downstroke. UP....and down, it goes. UP................and down. A death march. The song, sputtering in the panic of what to do next, will grab for a snare roll filler. The fill will extend out in concealment of a multitude of structural sins, until the bastard chorus saunters in like a perpetually late bricky, with all the energy of a sick cat. Oh, the unforgettable fire of it all. Let's go out, right now, and like spray-paint something.

If you're going to be basic, then you better make damn sure you're at least immediate, or cutting, or raw. If you're on your third album of devolved, semi-dysfunctional froth, then may you very well become The Dragon; the god of avenging hell fire; the dumb ephemeral rage of young passion.

So how come Streets In The Sky is a pea-headed pom-pom of a pub-rocker - a tiny thimble of an album, a talc-y titmouse; a talc-y titmouse of tittering tepidness. Quite where The Bronx's Joby Ford fits in as the producer is uncertain at this point.

But it gets really fucked up with The Enemy's attempts at aspirational anthems. Without any exaggeration some of the worst songwriting in major label history. 'S.O.S' sports the world's most pathetically uninspired guitar solo, while 'Come Into My World' is an abomination of cadence - lyrically and musically - featuring another all-time nadir for a musical institution; this time the middle eight. And next to 'Saturday', Hard Fi's 'Living For Weekend' is an avant titan of free-jazz; an allegory for British Marxism; a life-changing opus of unrepeatable genius. It beggars belief that people find this inspiring, or that they find wisdom in Clarke's lyrics. He's barely sentient. You must have to be very, very young. Maybe 11. Throughout the tragicomic goldmine that is their track-by-track podcast - with your host, Tom - without a hint of irony Clarke atones for their previous record's 'seriousness' as such: “we were forced into that overtly political place by people ignoring the social commentary on the first record.” Fucking really, Chuck Dee? It goes on: “What we do...is social observation” he muses, before describing anti-rich bumbler 'Bigger Cages (Longer Chains)' as a song about “People who think they're amazing.” He speaks of Chinese communism and the existence of God, and his publicist wonders aloud if you can still feel pain while unconscious from a drug overdose. Sometimes a squirrel-y band member will interject, but Tom isn't so sure: “I guarantee you don't know who that song's about.” A leader of men, the people's spokesman, he's rapping and be-bopping by this point, playing some jazz. 'This Is Real' is “self explanatory,” which, where he lives - in the reservation for undercooked finks - is troglodyte for 'moronically obvious'. And then the big finish, wherein Clarke accounts for the 'artistic decision' to end the album on a drum fill; denoting “unresolved”. It's more reflective of life, you see. because life has no answers.

Squirrel Guy: “It kind of does your head in.”

Five or so years ago The Enemy did a song called 'Happy Birthday Jane'. It was tender and poignant and most of all it was sad, like the way birthdays can be, and because regret is a big thing on those days. Especially when you're trapped in the cycle of poverty, as is the song's intimation. Take that as your one victory Tom, and please, for the sake of future generations, go away.