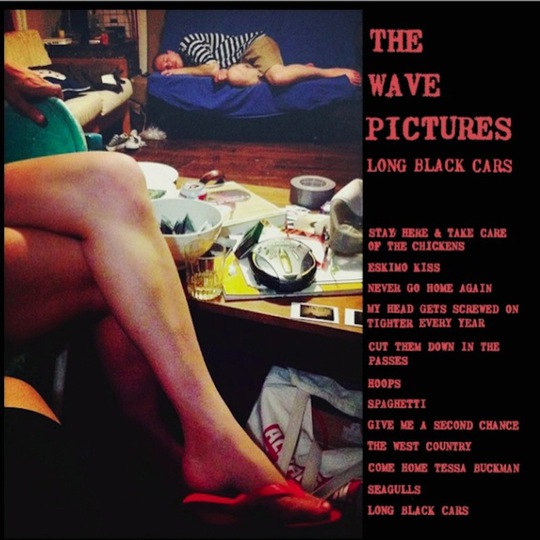 At a time when the future of music is a topic that regularly gets picked over by blogs and broadsheets alike, a band like The Wave Pictures can seem pretty old-fashioned. Three disheveled blokes wielding guitar, bass and drums, writing songs laced with kitchen sink drama and seemingly on a constant cycle of touring and releasing records, it can initially be difficult to see why they’ve developed such cult appeal. Surely there’s plenty of bands around that do this kind of thing?

If only. The beauty of The Wave Pictures lies in how they can take such rudimentary ingredients and create something genuinely exciting. This is the band’s third album in as many years, with singer David Tattersall releasing at least two solo albums or collaborations in between. Rather than exposing the limits of their sonic fields though, this proficiency has allowed The Wave Pictures to push and stretch the edges of that traditional three piece line up, seeing just what they can do with the basics. To describe Tattersall as an English Jack White might seem faintly ridiculous, but I’m going to do it anyway.

Long Black Cars follows many of the ideas set out on last year’s Beer In The Breakers, where Tattersall pushed his wig-out guitar skills to the forefront. Here though, the songs are taut and tight rather than languid and laid back. Opener ‘Stay Here And Take Care Of The Chickens’ has a menacing edge that suggests the poultry are being taken care of in a Mafioso sense, helped by a dizzying Dire Straights-esque solo. ‘Spaghetti’, probably the catchiest track on the record, reminds you of when The Coral could write a pop song, and still finds time for a bass solo and an almighty bit of jangle from Tattersall, and all in under four minutes.

There are extra elements added to the basic Wave Pictures template here as well, as they subtly push themselves in some different directions. A wash of harmonica hangs over ‘Hoops’, while ‘My Head Gets Screwed On Tighter Every Year’ is beefed up by some gentle slide guitar. Drummer Jonny Helm even takes the mike on ‘Eskimo Kiss’ and ‘Give Me A Second Chance’ to add variety on the vocal front as well. (Go see the band live if you get chance, just to see Helm perform both the rolling beat and the hollered vocals of the latter).

Occasionally though, there is a feeling that the belt could have been tightened on Long Black Cars as a whole. While there are moments like ‘Spaghetti’ and ‘…Chickens’ that capture the sprightly pop of their early years, there’s none of the languid, Neil Young-esque tracks that made Beer In The Breakers so impressive, and the balance is tipped in the favour of more mid-tempo, considered tracks.

It’s a minor quibble, and one that probably won’t concern many devoted Wave Pictures fans. It’s probably what you expect from a band this prolific, and you know there will probably be an EP, a split 7” or even another album on the way soon. Sometimes, it’s good to know that there’s still bands out there doing this kind of stuff, and doing it so well.