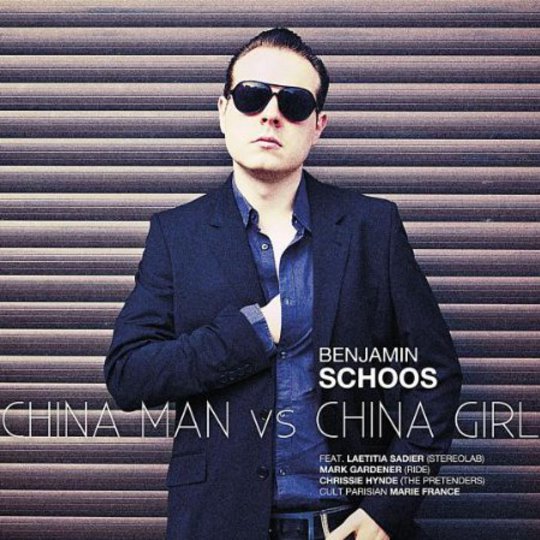 First of all Benjamin Schoos is Belgian. He is based in Brussels. He likes it there and describes it, with a display of astounding geographical awareness, as the centre of Europe. Which it is. Nearly. If you neglect to include Russia and its former states. Anyway, he takes advantage of this half-truth by floating around town like some butterfly of devilish intent, going to gigs, charming (and possibly drugging) whatever unaware and internationally successful visiting musicians he can find, before taxiing them back to his studio where crimes against music are flirted with and not always totally avoided.

Second of all (and this is as far as I’m taking my earth-shattering threat of numerising everything I ever think – although these are not the first and second things I’ve ever thought), I imagined I’d like this album. I thought, for the above reasons, that it might be an interesting, probably kitsch, Euro-centric exercise in audio-culturalist exchange. It sort of is. But, generally, it’s not very good.

So, here we go. I’m going to make this quick-ish to minimise the pain of disassembling and soaking this album with tear gas, before making it do a little dance with a silly paper mask on. It’ll be like plaster-pulling. Ready? Set? Yank…

Moroder. Vangelis. Jarre. People seem to like them these days, don’t they? They seem to think they had some good ideas. Does aping Woody Woodpecker’s laugh with a synth flute seem like a good idea? No it doesn’t. How could it? Yet, that’s what happens in the second track ‘Marquise’. And that basically goes for the opener (‘High Flying Melancholia’, Jesus…) as well. Nice stall-setting, Schoos.

Fortunately, Laetitia Sadier’s voice is distinctive enough to make ‘Je Ne Vois Que Vous’ sound like a particularly jaunty Stereolab shopping trip for lipstick, hats and sunglasses, with thrown in quaffing at the inevitable and al fresco champagne lunch break. Even without Sadier this’d be a nice track but her presence pushes it home unequivocally.

‘La Chinoise’ underlines Schoos as a genetically engineered musical magpie, as he borrows the brilliant chord progression and melodic thrust of Tortoise’s ‘Blackjack’. But to less brilliant effect.

A little later the noble rot starts in earnest with ‘Catch’ and its silly detective noir-spoof crap. Which, I suppose, would be fine if you're a big enough Poirot fan to entrust him to make you half an album’s worth of music, including this ridiculous mock-jazz Rhodes noodling, but I imagine that the vast majority of people, however, are not.

Then the album sees a return to an apparently recurring theme of a ‘China Man’ and, indeed, a ‘China Girl’ and someone trying to catch them for some reason. Or them out-heisting each other. Whatever. Now, I’ll freely admit I’m not a very good French speaker by any means. I’d look like an idiot if I didn’t admit that. Even my Franglais is, shall we say, “dessous du pair”, but, despite the name of the album, and that of some of its tracks, you’d have thought that more would have been made of its conceit when trying to sell it in other countries. Y’know, maybe explaining it in the press release would be a good start. Either way, it doesn’t matter. Even if I had spoken the language fluently, and totally absorbed the premise, I doubt it would make for much of a compelling musical crime caper. Well, it does on a level, but not on the intended one.

Significantly, two of the strongest tracks here are bolt-ons, perhaps excluded from the main body because they don’t fit into the wider plotline. Infamous French singer and actress Marie France complements a surprisingly fluent and fluid French vocal performance from Chrissie Hynde on ‘Un Garcon Qui Pleaure’, whilst Mark Gardener helps take Rialto’s doomed template and stretches it into the realms of taste and authority when he adds lyrics and vocals to ‘World’s Away’. It’s as though when Schoos succeeds in his thinly veiled kidnappings of musical alumni it inspires the songwriting to get up of its arse and deliver. When the stars are in situ, the magic is roused. With that in mind, I must say, that I didn’t start this article thinking I would be condoning putting a disorientated and gagged Serge Pizzorno into the boot of a waiting Renault Megane after he had appeared at Cirque Royal. But it turns out that now, maybe, I am.