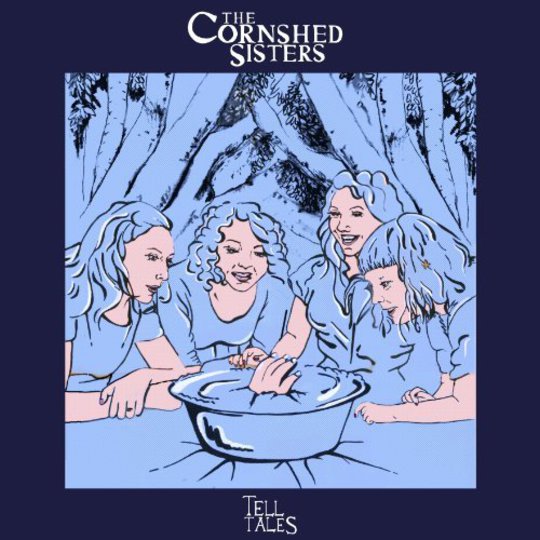 A series of folk hymns, The Cornshed Sisters’ debut album may be the year’s most left-of-centre release. It’s a balm to modern pop and a Psalm to the power of story telling. A four-piece female vocal harmony group with an unexplained connection to Field Music, Telling Tales feels much more like a genuine ‘Songs From Northern Britain’ than the Fannies’ Americana-sunshine.

On first listen, it is tempting to overlook Telling Tales as a vocal harmony release akin to the kind of album nurses release around a national commemorative day to raise money for charity. These could be bundled together as mum music, a release backed by the third sector and a major label, marketed to be tossed into the basket with the pork chops at the check out. Telling Tales will most likely not hit that market, but it has a sound both clean and warm enough to sit comfortably in the domestic, MOR, market.

To start with one sole criticism, the harmonies are conventional. The prospect of what could be delivered doesn’t get dispelled, solid chunks of vocal fifths and thirds keep this straight.

But this is also its underlying strength. Telling Tales grows with repeated listens. It’s musically delicate and vocally unabashed. The voices of these four women are rarely backed with much more than a piano and/or guitar and handclaps. As the songs become familiar, the characteristics of each really come through. ‘If You Were Mine’ races along with the wry humour of Cole Porter and at moments, gospel inflected performances. It is the only song backed with any percussion, in this instance a lonely shaker that churns it along like a (small) train.

Telling Tales has no topical agenda or itinerary, which is great for accenting the eccentricity of the songs. As a Tyneside based act the Sisters' music feels part local myth and part personal recollection, fervently meshed. Language is deployed with pride, as in their first single ‘Dance At My Wedding’ with the lyric, “He said he was proud, like when his dad had said he’d made good gravy”. This song is primed for British cinema melancholy, kids or a British A-lister staring glumly from a window, clearly having done something wrong, regretting an action. In the context of the song the regret is for lost family or friends. The piano and vocals pair and parley beautifully and with grace. Backing vocals occasionally thicken or provide counter melody. It’s a genuinely emotional listen.

The Cornshed Sisters also gladly display their influences. ‘Tommy’ can’t be denied as a slight twist on the ‘Chim-Chimney’ reprise from Mary Poppins. In fairness, Dick Van Dyke's hushed glance over the pastel London skyline at dusk strikes more boldly than this brief recounting of a boy who falls into a well. However it paints strong visuals and it’s refreshing to gleefully borrow the colours of those Disney mellow dramas

‘Pies For The Fair’ is a wonderfully surreal reversal of middle England fares, a Sweeney Todd-esque character this time deciding to use people who dress as rabbits for the filling of their award winning short-crust pies at the local fete. With a backing of handclaps this carries all the macabre confusion of The Wicker Man’s sword dance. This is immediately followed by ‘Sail To Me’, which could come straight from Jonie Mitchell’s Blue - heartfelt, longing and infinitely sad.

Telling Tales gladly succumbs to its own whimsy, has no stylistic compass beyond the inherent tones of a female vocal harmony group and is a delightful series of songs that are both beautiful and bizarre.