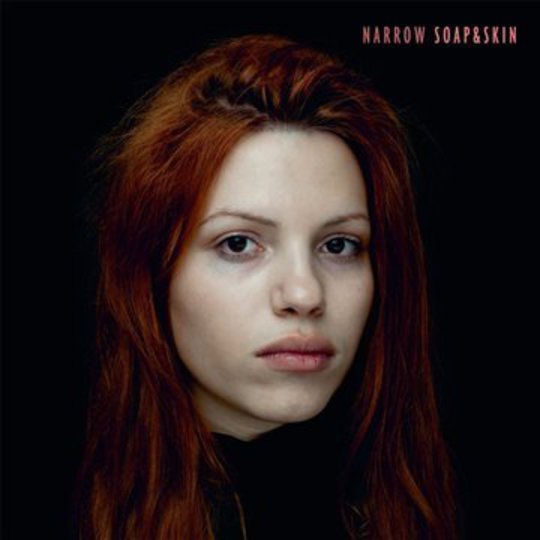 Ladies and gentleman, the time has come. After a year of unending ubiquity, Adele’s reign as the ultimate singer of sad piano-based songs is over. She’s won her Grammies, she’s courted controversy and she’s sold a shitload of albums. Under the circumstances, it would be wrong, even selfish, to ask any more of her. And so it is that ‘Someone Like You’ vanishes from daytime radio playlists and copies of 21 are plastered with sale stickers, in a ritual that marks the end of a distinct (and slightly dull) musical era. The age of Adele – for now, at least – is over.

But now where-oh-where will we find another lady to sing sad piano-based songs? Some of you may find comfort in the knowledge that Regina Spektor is soon to release a new album – 'Surely that will provide a suitable soundtrack to my next break-up / exam period / nostalgic slideshow?’ I hear you ask. My answer is this: behold Anja Plaschg, who you will worship as Soap & Skin, for she is the new Queen of Singing Sad Piano-Based Songs.

And what a bounteous queen she is, for her new mini-album, Narrow, has not just one sad piano-based song on it, but eight! How Adele the Abdicator must shake with envy.

Okay, so suggesting that Anja Plaschg is the new Adele might be stretching it a bit. Narrow has too many songs sung in foreign languages (two) for that to be the case. But after the year the piano has had after the success of ‘Someone Like You’, it’s nice to hear someone doing something different with the instrument for a change.

Lead single ‘Wonder’ is the only track on Narrow that comes close to chart-friendliness, by which I mean that Jo Whiley has played it on her Radio 2 evening show. Its ivory arpeggios rise and fall like a funereal ‘Unchained Melody’ and the chorus is whispered by an eerie male choir, awakening the song’s hidden strangeness in a way that normally only British Sea Power can.

Plaschg’s weirdness (i.e. commercial unviability), which she hints at on ‘Wonder’, is at its most luminous, strobe-like and severe on ‘Deathmental’. Its welding together of industrialism and classicism instantly brings to mind These New Puritans – there are the same heavily processed orchestral movements, sword-drawing samples and gothic beats as on Hidden. But here the Austrian’s heavily accented, multi-layered vocals add a hint of humanity, as she sings coldly, “Life lays in your heart like in coffin”. She’s warmer, but still experimental, on ‘Boat Turns Toward The Port’, where she pleads for an unnamed character to “Stay here” while clanging till registers play out a beat in a way that, thankfully, couldn’t sound less like Pink Floyd’s ‘Money’.

All of this authenticity could be swiftly undermined by the knowledge that another track featured on Narrow, ‘Voyage Voyage’, is a cover of a 1980s Europop “classic”. Yet despite the original sounding like a Rock Profile parody of Eurythmics, in Plaschg’s hands it starts to sound like a soundtrack to Soviet oppression, sung in French by the star of a film about spies in the Cold War. As weepy strings emerge towards the track’s closing bars, it comes close to stunning (though the video for Desireless’ original version is still worth a look if you want to see a white, female version of the Fresh Prince of Bel Air, Hilda Ogden playing cards and Ron Weasley getting his end away).

It’s opening track ‘Vater’ that sees Plaschg at her most Adele-like, which sounds like a strange thing to say given that its sung in German. But like ‘Someone Like You’, it deals with the end of a relationship – though in Plaschg’s case it’s the death of her father rather than the abandonment of a lover, and it’s this difference that seems key. After all, there’s something altogether more permanent about the death of parent when compared with a romantic break-up, and its Plaschg’s (arguably) greater suffering that makes her story all the more compelling, visceral and moving. Add to that an exotic accent and an ear for experimentation, and prepare to bow down to the new Queen of Singing Sad Piano-Based Songs.