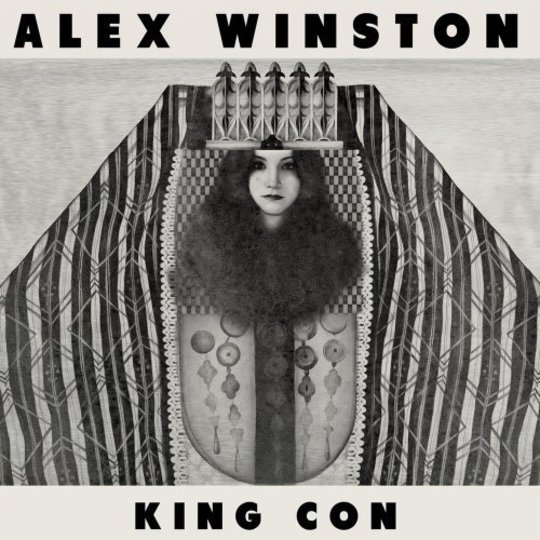 Pop music usually concerns itself with talking about feelings; it’s not usually the territory of electroshock therapy and televangelists. Which is a wasted opportunity. Genuine sentiment is hard to convey in a love song, but it’s easy to relate the peculiarities of society. With the release of her debut album, King Con, Alex Winston has forgone deep personal reflection and confession in favour of interpreting the stories and ideas of others.

And Winston is full of ideas. Why write about teenage rebellion when you can focus on the life-altering decisions of Amish adolescents? Why be in love with Elvis Presley when being in love with his tacky velvet portrait is infinitely weirder? But she executes these concepts with such passion and flare that they are not only convincing, but uncomfortable in the way projects of substance often are. It’s damn smart and it’s damn catchy.

The key element to Winston’s music is her vocals, and so much of her songs hinges on building huge, booming harmonies. Her own voice, which maintains the high octave control of a soft-spoken banshee, is looped and overdubbed upon itself and bolstered by backing singers to create harmonies that are always rich, sometimes beautiful, and occasionally startlingly powerful.

Under all of the vocals is a myriad of instrumentation that affects the same looping patterns employed in the harmonies; the arrangements of pianos and synths, endless chimes and Big Nineties Drums skirt whimsy without ever becoming too precious. Even 'Choice Notes', with its plonking piano strains and reverb blurred vocals, tiptoes past manic pixie dream girl and settles for joyful, honest fun.

Six of the album tracks have been collected from Winston’s EPs. The arrangements on these songs are exactly the same, though some have been rerecorded and/or remixed. These touches are slight, and can mostly be accounted for in a bit of polish and slight tweaks most likely noticed by audiophiles. Not that the steady rhythms of 'Locomotive' or 'Velvet Elvis' need reworking. Even though their initial release is a year behind them, they are still some of the best pop songs you’re going to hear this year.

So whatever the line is between quirk pop and just plain pop, embrace harmonies about polygamists and parasites. Unlike artists who rely on personal experiences for their material, there are enough oddities in the world to supply Winston for many albums to come.