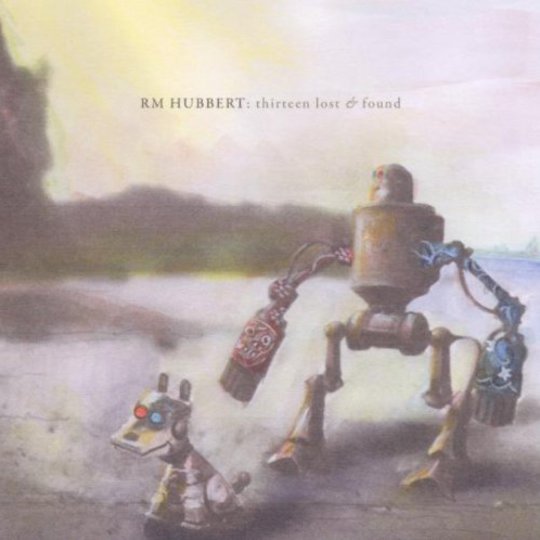 RM Hubbert is a fascinating and talented guitarist. Originally part of the little known Scottish indie act El Hombre Trajeado, he returned a few years ago with his sombre instrumental debut ‘First and last’. Thirteen Lost and Found is primarily instrumental again - intricate and not afraid to leave pregnant pauses to capture your attention – but also employs a raft of talent to help flesh out the over-riding vision.

The success of the record lies in Hubbert managing to inject his solitary guitar with the subtlety and nous of a full band at times, letting the strings reverberate and echo when trying to be poignant and strumming fervently to ramp up the tension. At times it sounds like he is fighting the thing, trying to wrestle it under his control.

Many of the record’s strongest tracks feature just him. ‘V’ and ‘For Joe’ are utterly delightful little pieces, barely three minutes long but seemingly soundtracking the dawning of a glorious spring day. They marry up well with the more rhythmic ‘Switches Part 2’, where presumably some knuckles are used to create an almost flamenco-esque beat to the song.

When he does work with others, it’s often with highly successful results. With Stevie Jones and Paul Savage on ‘Sandwalks’ they create the musical equivalent of a peaceful stroll along the coast disrupted by a nasty storm breaks. ‘Gus am Bris an Latha’ with John Ferguson is a seemingly slight duet, until the two begin to intertwine their melodies at the one minute mark. Elsewhere Shane Connolly, Alex Kapranos (who also produced the record) and MJ McCarthy bring the slightly Tortoise-like ‘Hungarian Notation’ to life.

When vocals do come to the fore, they do so without feeling out of place either. Aidan Moffat’s recent resurgence continues with the wonderful duet ‘Car Song’, which paints a wonderful story about a drive to the seaside and the desire to almost walk out to see and never turn back. Even by his own standards, the lyrics are truly delightful and mingle perfectly with the fretwork and Alex Kapranos’ uplifting accompaniment. And while ‘Half Light’ at first baffled me with its slightly melodramatic violin backing, the vocals by Emma Pollock have over time won me over, perfectly setting up the final third which features the ever-reliable Alasdair Roberts’ thick Scottish drawl on the barren but beautiful ‘The False Bride’. The only real misstep is the somewhat laboured duet with Marion Kenny and Hanna Tuulikki that feels more like a pastiche of another cultures’ musical landscape as opposed to an ode to it.

Much like last year’s excellent charity comp by The Fruit Tree Foundation - which also features many of the same musicians – it’s highly unlikely that this record will trouble the charts or be performed with the entire troupe in tow more than once, but it’s highly deserving of some attention regardless and a follow up record.