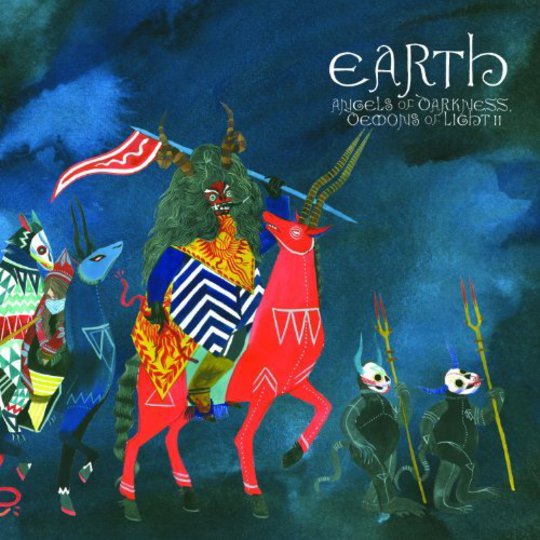 In a previous review, I argued that it was near impossible to ‘sell’ Earth to anyone who didn’t already ‘get’ Earth. This feels both especially true at present, and clearly a more widely applicable paradigm for music journalism as a whole: the individual has all the resources at his or her fingertips. Music writers have exhausted their thesauri looking for new and arcane synonyms, swarmed existing information available searching for some formerly unpublished morsel with which to shine the light on material, only to find that their readership doesn’t really care.

A quick google search can reveal multitude of adjectives used to describe Earth’s music by critics; ‘marathon’, ‘meandering’, ‘slothful’, ‘trawling’ and ‘glacial’, all suggest that Earth are slow, in musical terms. That doesn’t quite suffice as a descriptor in the present environment. In the case of Angels of Darkness, Demons of Light II, it’s fairly likely that any individual with an internet connection could tell you, in some form or another, that Earth’s music is ‘slow’. Similarly, the man on the street, given the time and a Wi-fi hotspot, could probably inform you that Dylan Carlson once had a friend called Kurt Cobain, a friend he appreciated so much that he once bought him a shotgun for his birthday. Some of them might even be able to tell you that on their last album, Earth counted among their ensemble one Lori Goldston, who used to play cello on tour for Kurt’s band. The point is that it won’t suffice, and it hasn’t sufficed for several years, for a critic to merely describe Earth as ‘slow’ and lovingly paint a picture of Carlson’s history: the former addict, the stoical grunge survivor, the redeemed soul. How to proceed, without resorting to repetition (both personal and general) or cliché, is ironically the problem here. It might seem apt to describe the longform, repetitive and improvised music Earth have released by synthesising a review made of parts of other reviews, repeating previous commentary ad infinitum and meshing it into something coherent.

Yet that would be missing an essential point concerning Angels… II, something which comes from its very existence as a stand-alone recording. As suggested by its title, it's a record cut from the very same cloth, the very same two-week improvisational session, as its forebear. Yet it has been packaged, advertised and released separately. What this suggests is not marketing savvy but rather a more holistic approach to music creation and distribution. Earth don’t hold double standards and they refuse to be rushed: everything they do takes its time to unfurl. This is something of a rarity within the current climate: the shifting, fluid nature of digital existences makes vizi privati, pubbliche virtu an almost natural reaction. Earth find themselves waking up with such strange bedfellows as Lil’ B and Burial, if characterised by the apparent entirety of their respective visions and modus operandi.

It is this that is key to understanding Angels...II. It is both a piece of music and a physical manifestation of the way that Earth work: a patiently constructed recording, which shows the marks of former works, but rightfully independent of its forebear. While ‘Waltz (A Multiplicity of Doors)’ unwinds languidly, like a long lost b-side recorded sometime between Angels...I and the ‘new’ Earth’s breakthrough record The Bees Made Honey In The Lion’s Skull, elsewhere there are flourishes as yet unheard. The drifting silences that obscure “Sigil of Brass” lend a sparseness to the track: it’s the sounds of the orchestra tuning up ahead of the main event, disharmony and harmony all at once. Likewise 'The Corascene Dog' swings and saunters with a sense of purpose, just as much as its carelessly overlapping instruments meander, ebb and flow in the manner expected.

These subtleties manifest themselves most clearly on the 'The Rakehell'. Built around bassist Karl Blau’s supple groove, it sounds almost like Parliament, chopped and screwed beyond recognition, Dylan Carlson’s freewheeling guitar scrawling over a rhythm section so soulful that you half expect Isaac Hayes to break into “By The Time I Get To Phoenix” at any moment. It’s another subtle reminder of why the record has been released separately from it’s forebear: where on the first instalment the mood remained steadfastly sombre and in keeping with the record’s overall tone, “Angels…II” is able to shift seamlessly between styles and moods without significant repercussions. It’s engagingly fluid whilst being at once soulful, pyschedelic, dark, hopeful, heavy and delicate.

The evocative and varied nature of the sound, which deviates significantly from the more moody first instalment, can be attributed to the improvisational quality of the recording, which is more immediately apparent than before. In contrast to the vast majority of Angels… I – where the instruments sounded mournful and empty, separated and isolated whilst dripping with a clear pathos – the marriage of all four instruments here sounds more harmonious and developed. That humming, vibrant, full sound that characterised Carlson’s earliest explorations of Americana returns, as instrumentation collides, strings being mistaken for guitars, guitars melting into bass, bass metamorphosing into percussion. The end result is perhaps the most classically psychedelic production that Earth have put their names to: it’s freeform and vividly Technicolor, washes of sound more like words on a page or colours on canvas open to interpretation, rather than the more precise cinematic directions of say, a script. The record takes you where you let it carry you, instead of dragging you along for the ride.

Completing the circle, this creative fluidity also seeps through into Earth’s working method. Joseph Stannard, in the most recent (February 2011) edition of The Wire, wrote that Earth have become atemporal, their music existing ‘outside of the times’ and displaying a ‘working ignorance’ of modernity rather than a passionate hatred of it. He has captured exactly the status of Carlson, Davies, Blau and Goldston over these past two recordings: Earth, unlike other musicians who find themselves at odds with modernity, react not by gouging, biting and screaming (not mentioning any names here) but instead by releasing and performing music on their own terms, trudging their own steady path. They are not only patient; they demand patience, both from consumers and listeners. It’s an ethos that cannot be described as old-fashioned, but rather omnipresent throughout the development of music, both to the left and right of the avant-garde. Angels of Darkness, Demons of Light II represents not only the most overt and successful attempt to capture the patience, subtlety and fluidity of Earth’s talented cast, but also the most accurate document of their patient, stoical and determinedly psychedelic ethos.