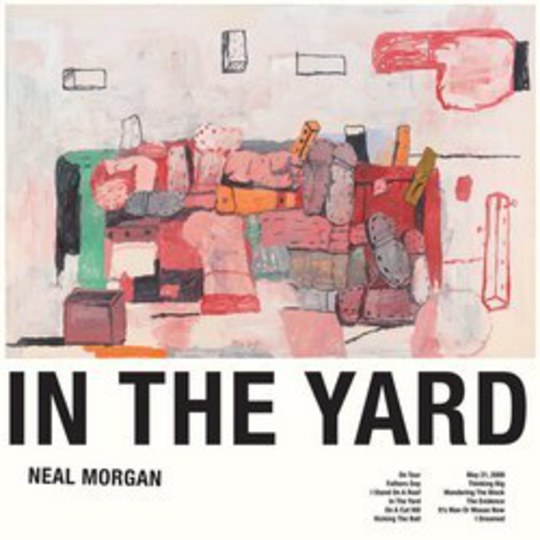 Just reading the track titles on Neal Morgan’s second full length gives an insight into what he’s trying to achieve throughout In the Yard. ‘I Stand on a Roof’, ‘On a Cut Hill’, ‘May, 21 2009’. Running through this record is a preoccupation with the specifics of time and place, exploring in detail a series of given moments in a stream of consciousness manner. To do so, Morgan employs nothing but voice and drums; an uncommonly narrow combination of instrumentation, but one which serves his purposes suitably well on this album. Stripping his music to unrefined explorations of the interplay between melody and percussion, paralleling the lyrical focus on the interplay between sensory impression and introspection, In The Yard can be rightly described as experimental, in one of the truest senses of the word.

Opening track ‘On Tour’ makes for a perfect introduction to Morgan’s work; an opaque and abstruse mission statement preparing us for half an hour of music which isn’t exactly, as they say, ready for radio. Four whipcracks of snare drum, a few seconds of silence, “floating in warm quarry water”, four whipcracks of snare drum, “in north Carolina...”. Maniacally battered drums swell up to engulf the spoken word, building to an almighty crescendo of aggression, recorded through what sounds to be a crusty old microphone in an old tin shelter. It’s a ramshackle and abstract piece of rhythmic improvisation, counterbalanced by a measured recantation of first-person memory.

Intrigued, the listener is next treated to the far more sharply focused effort of ‘Fathers Day’. As with all these tracks, just a combination of voice and percussion, Morgan puts himself to creating a more rigidly structured piece, laced with melodic development and ornamental harmony. A rolling drum beat forms the backdrop for a myriad of overlapping “oooohs” and “ah-ah-ahs” - interlocking in a complex yet understated way, befitting of someone with the rhythmic instincts of a man deemed worthy of backing Joanna Newsom and Bill Calahan’s touring bands. Again, the subject matter is that of stream of consciousness perception of the everyday - the rhythms and background vocals responsive to the sensory impressions described in the lyrics, building layer upon layer of new percussive elements and impassioned harmony as the poetry builds steadily.

The rest of the album is made of of tracks which lay somewhere between the two poles of these opening numbers; between the abstract improvisatory feel of ‘On Tour’ and the rigidly structured, meticulously constructed framework of ‘Fathers Day’. Throughout, the interconnection between rhythm and vocal remains the central strength of these tracks, with the lyrical relationship between the mundane specificity of time, place and action (“kicking the ball”) metamorphosing over the course of four minutes into introspection and personal insight (“it’s pride that makes a man”).

The arrangements are effortlessly complex (check out the lapping shore of vocal harmony ‘On A Cut Hill’, or the abrupt smash cuts between thundering drums and soothing voice on ‘May, 21 2009') - so effortless and masterful as to be difficult to pinpoint where improvisation ends and painstakingly laboured construction begins. Of course, with each track following quite a specific set of blueprints, it must be admitted that In the Yard does end up feeling somewhat longer than its 40 minute running time, and it must also be conceded that the record can be looked at as something of an exercise in self indulgence if one is so inclined. But - with such a wealth of masterful musicianship and expressive invention - it’s above all else an undoubtedly arresting work which paints startlingly vivid images of place, moment and thought, and with such a small array of paints on its palette at that.