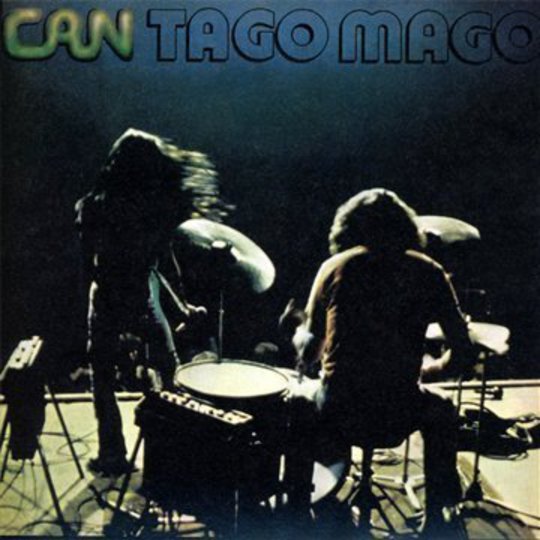 Hey, you know what’s cool? Smoking (Drowned in Sound in no way endorses the view that smoking is cool). Think back through the history of pop culture going right back to the Golden Age of Hollywood, or even the era of great European cinema before that; the smell of cigarette smoke pervades both its great characters and its screen idols: James Dean, Richard Burton, Fellini, Fassbinder, Paul Newman and Jack Nicholson. The same can be said of the great pop music icons; smoking is the Sixties counter culture movement, smoking is Dylan, Tom Waits and Hendrix, smoking is Keith Richards. You know who’s anti-smoking? Michael Bolton. No one wants to be Michael fucking Bolton. So, smoking is rock and roll, and smoking is cool.*

It is therefore appropriate that the dusky blue haze of smoke clouds the original English cover of the repackaged forthieth anniversary reissue of Tago Mago, the seminal 1971 album from Krautrock pioneers Can. Of course, you already know about Tago Mago. You know that it’s arguably the most influential rock album ever recorded, that everyone that matters – and many who don’t – between Bowie and Radiohead cites it as an influence. I have a sneaking suspicion that this is the 1984 of rock albums, in that everyone knows about it, but most people pretend to have listened to it. You’ve probably heard that quote from The Teardrop Explodes frontman Julian Cope that it “sounds only like itself, like no-one before or after” given how often it’s been recycled as some kind of post punk mantra.

Except it’s not really true, is it? This newly remastered edition of Tago Mago is an ideal opportunity to give it another/a first real appraisal as Holger Czukay’s recording, so shadowy and muffled before, now comes across impressively clearly thanks to Andreas Torkler’s tinkering. Part of the pleasure of listening to Tago Mago before was the way it sounded as though it was being played in some far off room, behind closed oaken doors by an unknowable band. The fortieth anniversary edition, however, is a different experience, remastered to a far crisper sound than is expected of reissues, and the fumigated spectres of Syd Barrett, Lou Reed, and Bitches Brew era Miles Davis especially, roam more freely than ever; Tago Mago may have been recorded three years after the 68er-Bewegung student movement, but its roots in the same Western counter culture of the Sixties are now only more evident.

Really, though, you can only appreciate the full genius of this record by listening to the music that followed it; listen to Bowie’s Berlin trilogy, to post punk pioneers such as The Fall, Joy Division or Bauhaus, to the low-fi alt rock of the Nineties or to the dissonant trickery of Kid A-era Radiohead. Their sonic wizardry, their swirling discordant drones and unsettling vocals can all be traced back to the Krautrock movement that Tago Mago spearheaded. I could (and, back in my university days, did) spend countless hours writing innumerable pages on the influence of Krautrock and Can’s pre-eminence in its pantheon, but I’d be doing DiS a disservice by retreading old ground; if you’re in any doubt then Cope’s excellent book Krautrocksampler is as thorough a tome on the subject as you’ll find, and leaves little to add.

In addition to the remastered record, the 40th Anniversary Edition comes with a 48-minute, three track (!) live CD, recorded in 1972. It’s the first official live release since 1999s’s Can Live and offers the listener the best opportunity to date to hear the alternative dynamic of the band in a live setting after years of B-standard bootlegs. The songs are barely recognisable from their studio form; ‘Mushroom’ may be the most accessible track on Tago Mago, but here it exists as a wordless vocal interspersed with the understated psychedelic darkness of Michael Karoli’s guitar. The highlight meanwhile is ‘Spoon’, which has evolved from the nice, three minute track on Ege Bamyasi - as close as Can in this guise came to pop music – into a sprawling half hour behemoth; even those who don’t find such an epic enjoyable will have to admire it for its sheer scale and ambition, not to mention the physical feat of drummer Jaki Liebezeit for Motorik-ing his way through.

If you have no interest in Can then there is nothing on the 40th Anniversary Edition that’s going to change your mind and draw you in... but then if you have no interest in Tago Mago then the odds are pretty strong that you’ve wandered into the wrong part of the internet. The band, and this album’s groundbreaking work has never been so wonderfully presented, and this reissue is a neatly packaged reminder of its stunning timelessness.

*This is a riff on an old Bill Hicks bit. By acknowledging this I’m neatly avoiding becoming the Dennis Leary of music critics.