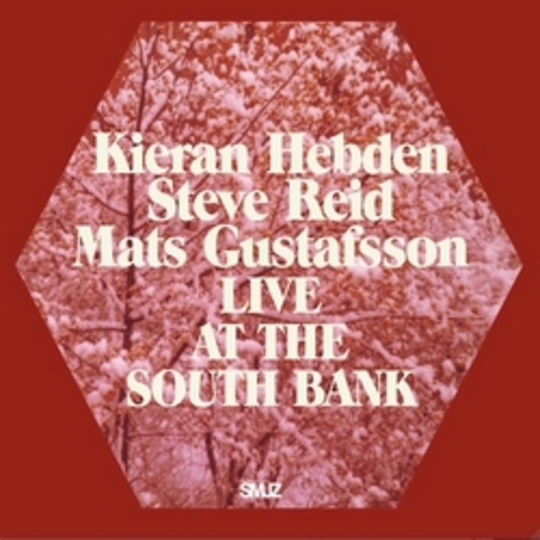 Some listeners might not be aware of the extent of Steve Reid’s musical past. He began his 50-year career as a 16-year-old working closely with Quincy Jones and later went on to drum for a list of undeniable legends, including Miles Davis, James Brown, Sun Ra and Fela Kuti, as well as appearing as a session musician on innumerable Motown records. In 2006, after a period of relative inactivity, he began working on a new project with Kieran Hebden, known to most as Four Tet. After a meeting of minds in Paris, Reid and Hebden went on to release four collaborative recordings with Domino before Reid’s death in April 2010 at the age of 66.

In that respect, this fifth and final recording could be seen as a bookend of sorts (its concluding track, ‘The Sun Never Sets’, feels particularly apt). Featuring songs penned across the duo’s three-year partnership, Live at the South Bank was recorded in June 2009 in the Queen Elizabeth Hall at the South Bank Centre in London. Incredibly, this performance was the first time either of them had played with Swedish saxophonist Mats Gustafsson, who originally attracted the attention of Hebden at the Oslo Jazz Festival.

After a slow build-up of percussion and sampled background texture, ‘Morning Prayer’ emerges as purely a Hebden/Reid track, settling into a rolling jazz groove as Reid hits hard and Hebden lays out a melodic framework. As the noise subsides, the extent to which the two play off each other’s ideas becomes much more apparent. Little intricacies that are clearly improvised play themselves out, with rhythms and counter-rhythms ebbing and flowing as they bounce from drums to sampler and back again. There is something looming and tense about this particular track, making it well placed at the start of the 83-minute set, presented here as a 2CD package by Norwegian label Smalltown Superjazz.

Gustafsson enters the action on ‘Lyman Place’, which grows out of sampled wood-block percussion and a dirty bass line. His initial squeals sound like they too could be coming from Hebden’s sampler, but as his improvisation peaks it is clear that this is a musician of considerable talent. His lines are bellowing and guttural, rarely hitting discernable melodies apart from the two note refrain that resurfaces as the song draws to a close, with Hebden belting out special effects comparable to a spaceship taking off. At times the sax is used more to provide texture than anything else, although there are points at which it sounds so close to a human voice that the ear struggles to make the distinction.

The most striking element of this recording is undeniably Reid’s drumming. Although his rhythms might seem aimless or even indulgent if taken in isolation, adventurous contributions from Hebden and Gustafsson – Hebden’s signature synth sounds on ‘Untitled’ and Gustafsson’s obtuse wailings on ‘25th Street’, for example – inject them with a new life, allowing them to meander thoughtfully between loud and soft with complete composure. The result is surprisingly coherent for a half-improvised set, although most tracks could be shortened without sacrificing their restless energy and raw sentiment.