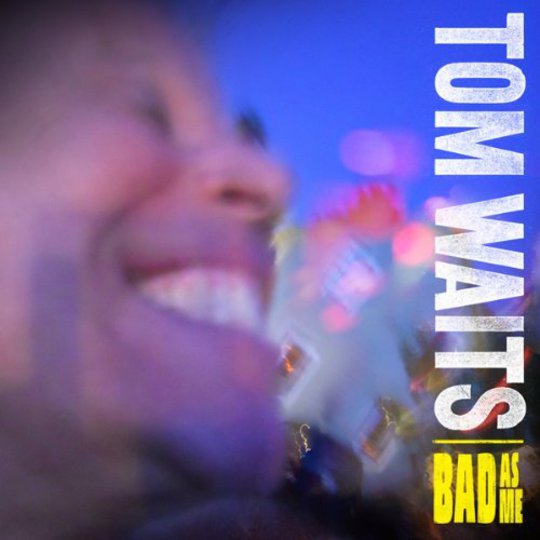 Back in 1992, in a piece for the St. Louis Post Dispatch, a journalist called Steve Pick cast an eye over the recent release of Tom Waits’ newest composition Bone Machine, the record that would make it ten studio albums for Waits 19 years ago. Pick gladly sucks up the ineluctable apocalyptic fervor that Bone Machine weeps through its gashes and sores and delights in the dirt that coats songs so willing to assure us that "hell is boiling over/ and heaven in full/ we’re all chained to the world/ and we all gotta pull/ and we’re all gonna be/ just dirt in the ground", before concluding, somewhat prosaically after the talk of floods, fires, rain and angels, that Bone Machine is a ‘welcome return from a talented musician’. Pick, however, makes two other points that, whilst relevant in releation to any discussion of Waits’ career, seem particularly pertinent with the release of Bad As Me, his seventeenth studio album and the first set of entirely new material since 2004’s Real Gone.

The first is the pretty basic and broad assertion that ‘the career of Tom Waits can be reasonably neatly divided into everything he did before 1983 (when he was a sort of neo-beatnik poetic singer/songwriter) and all the more wilder, more experimental sounds he’s played with since then’. It’s a fair and easy assessment that still holds but, analytically speaking, is probably on par with ‘World War II was a conflict between two opposing sets of nations that lasted from 1939 to 1945’. It doesn’t scratch at much, but for the purpose of our story, it’s still important to know the facts. The second point however, is slightly more illuminating. Pick recounts that he once read an interview with Waits in which ‘Waits said that he was fascinated by music that he doesn’t quite hear properly. For him, the music somebody is playing down the hall of an apartment building, muffled by the walls, covered by an air conditioner and mingled with traffic sounds, is truly compelling’. The reason for this fascination, Pick reveals, is that ‘Waits is not someone who wants all his information handed to him on a single sheet of paper; he wants to work with the bits of information he receives and shape them into something he can imagine. It seems to me that this is at the heart of what he is doing on Bone Machine’.

But it seems to me that this is at the heart of every step of Waits’ career. Tom Waits is the muffled music and he has always taken care to ensure that there is an appropriately phlegmy air-conditioner in the room or a car buzzing past at just the right moment so that the listener doesn’t ever have all of Tom Waits handed to him on a piece of paper. Key to this have been the myriad characters, tall tales and shifting rhythms that have been slightly tweaked or left behind on his search for the next routine to conjure and story to tell. But with Bad As Me, it feels a little like Waits has been willing to wake up previous incarnations and magic a bash out in the big red barn, with a slight crossing of the 1983 divide, meaning that shtick previously seeming to have been worked over with a shovel in the backyard and silenced for good is suddenly afforded a fresh invitation.

Waits once said that, ‘half of me, I feel like a jackhammer. I love to holler and stomp my feet and throw rocks. But there’s another side of me that’s like an old man in the corner that’s had too much wine. I’m probably too sentimental for my own good’. Bad As Me is appropriately schizophrenic, with Waits clearly believing that grace and fury need to be side-by-side to bring the best out in each other. ‘Chicago’ is a restless and peripatetic speedball to set things brutally in motion. All at once slick and muscular, scrappy and frayed, it’s a swift and precise kick to make sure that we haven’t drifted off in the last seven years. Attention guaranteed, the pace is soon slowed for ‘Talking At The Same Time’, a slinky noir-ballad that I like to imagine Waits singing in spotlight with one had on hip, body hugging a sequinned dress as his blood-red lips make shapes at our hunted protagonist buying time at the bar. ‘Kiss Me’ is all early-hours Blue Valentine drawl, with Waits delicately imploring to a love that he has shared many seasons with, "kiss me like a stranger again", before the thrusting snap of ‘Satisfaction’ prompts a pithy callout for ‘Mr Jagger and Mr Richards’. The latter pops up for a nice duet on ‘Last Leaf’, where the pace seems to have been shaped to fit the steady motion of any rocking chairs that would gladly and snugly accommodate these two wizened old brawlers.

Coming to the end, it feels like Waits has deliberately tried to raise your spirits so it’s all the more painful when he breaks them. ‘Hell Broke Luce’ clearly doesn’t have a narrative fit for comic relief ("boom went his head away/ and boom went Valerie/ what the hell was it that the President said?/ give them all a beautiful parade instead"), but the unrestrained abandon of his phrasing can’t help but put a smile on your face in what turns out to be a pitch-black comedic riff on the inhumanity of war. Suddenly ‘New Year’s Eve’ ushers in closing time, and our hearts are breaking as Waits exploits the unbearable piquancy of people desperate for fresh starts or old beginnings on the one night of the year that can routinely make either seem tantalisingly possible and painfully out of reach at exactly the same time. "I was leaving in the morning with Charles for Las Vegas/ and I didn’t ever plan to come back/ I had only a few things/ two hundred dollars/ and my records in brown paper sack".

Bad As Me sees the performer reaching back into his bag of tricks to pull out a few favourites in a characteristically exhilarating, terrifying, heartbreaking, tear jerking, bone-rattling style. Customary in any piece on Waits seems to be an effusive description of the adjective and metaphor friendly shape-shifting voice that is again the star of the 13 tracks here. But I couldn’t think of any better description of his vocals than to simply say that they sound just like any Tom Waits on an album that is purely all of Tom Waits.