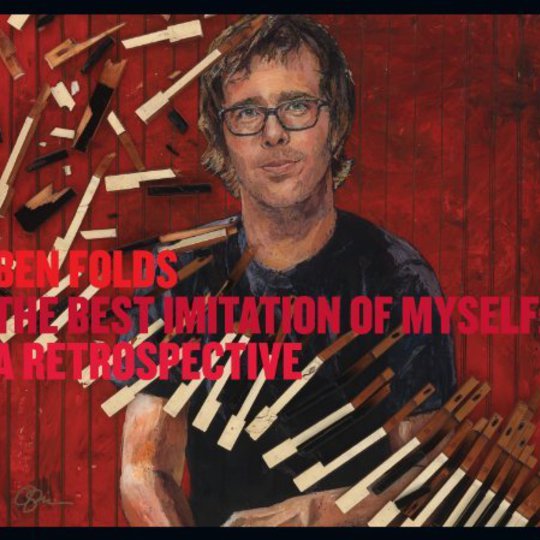 When putting together a retrospective, how can you hide that a musician went from inspired to mediocre? Well, you could confuse us - shake up the chronology. And you could distract us - split it into three separate discs: hits, live, and rarities. Then, maybe, no-one would notice.

But it's a useless scheme if everyone knows it anyway – and Ben Folds' descent into schmaltz seems to be old news. In 1995, when his little-known North Carolina trio Ben Folds Five released its self-titled debut album (featuring, entertainingly, one ‘Chris Eubank’ on cello), it had a huge impact among the indie kids who were lucky enough to discover it. Folds' piano stomped and rolled through wonderful harmonies, his lyrics were intelligent, flippant and funny, and his voice cracked with enough loser desperation to stop the album's exuberance from ever becoming mawkish. It was a big deal. When a DJ played its standout track, ‘Underground,’ some ten years later in a hipster bar in London, I raced onto the dancefloor with an Australian friend – as delighted and disbelieving as me that this long-lost four minutes of magic was getting an airing – and we slammed the fuck out of the pit fantastic, singing along to every word. Proudly outed as part of the global uncool, we slunk back to our corner and I did a mini-retrospective in my head. Damn, I thought, Ben Folds used to be great.

So it's no surprise that almost all of that first album pops up here on The Best Imitation of Myself, as well a lot of the band's second album, Whatever and Ever Amen (1997), which was louder and angrier than the first, and just as much fun. But given that each subsequent effort got weaker, it's also no surprise that ‘Don't Change Your Plans’, the representative track here from third BFF album The Unauthorised Biography of Reinhold Messner (1999), is plodding and unremarkable. I remember listening to it when it came out and staring at the stereo with disappointment as the sap rose... and rose. By then, either Ben Folds was getting schmaltzier or I just knew his schtick too well.

When he branched out into solo work soon after, it seemed he really had used up his best ideas. His songs had become discernibly less original and vibrant, more paint-by-numbers. Yeah, he'd inherited Elton John and Billy Joel's gift for squeezing an unholy amount of sentimentality out of a piano, so the songs flowed. But unlike them, he wasn't made of visionary enough stuff (and if that sounds ridiculous, I'd argue it... to the death!) – and so his craft stagnated. His songs have the same templates – observations of everyday life, wry philosophizing, clever vignettes – but rarely the same genius.

Luckily, when you allow that a fair proportion of this retrospective comes from those fantastic first two albums, and that there are still great moments on the back catalogue beyond that, there's a lot to like here. The live CD is the most fun, with Folds' famously dextrous fingers going at it full pelt. ‘Mess’, a wussy embarrassment on record (The Unauthorised Biography...), magically finds pulse and texture. In ‘Effington’, from Way to Normal, the piano shimmers so magnificently that Folds' voice, mercifully, moves into the background for once. And there's a scorching duet of ‘Careless Whisper’ with Rufus Wainwright, in which Rufus' scratchy, sexy tones both complement and expose the limits of Folds' own harmonizing skills.

So what about the new songs then – a return to form? Judging by the three tracks premiered here, it's a good thing Folds is playing with Darren Jessee and Robert Sledge again, because it sounds like decent standards are being met. The old predilection for channeling Todd Rundgren's pop powers rears its head in ‘Tell Me What I Did’, while ‘House’ and ‘Stumblin' Home Winter Blues’ show that the band's knack for a plaintive ballad is intact, even if the results aren't going to blow anyone's mind. There's potential there, though, and if they rustle up an album, it'll be worth hearing. Even if Folds truly has fallen into an eternal MOR slump, the alchemy of Jessee and Sledge might still spark a little something.

Or maybe not. Maybe, 15 years ago, it was just a coincidence of talent and timing. The perfect moment for songs like ‘Julianne’ or ‘Kate’, with their weird images of Julianne looking like Axl Rose and Kate “handing out the Bhagavad Gita,” to get stamped on my imagination forever. I listened to a lot of mopey Britpop back then and remember switching from my diet of Mansun and Gene (yeah, whatever) to Ben Folds Five. I couldn't believe the joy. The manic ebullience. It was completely addictive. But after those first two albums, nothing hit the spot. And though it's well disguised – thanks to the distractions of the Live CD, the rarities and the new songs – sadly, this retrospective proves that.