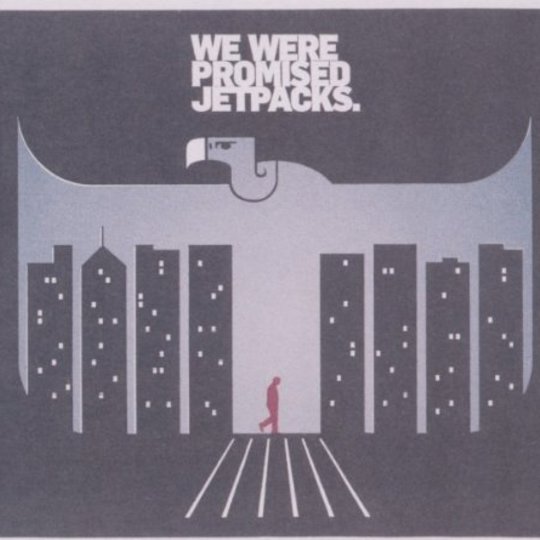 In The Pit Of The Stomach is a great advert for what can be created when a band get the right producer and sufficient preparation time, as opposed to prematurely shooting their load in fear of exceeding their expiry date. Unlike their primitive, and at times ropey, debut album, here We Were Promised Jetpacks have chosen to press the epic button.

Not in a 'Let’s turn everything up to 11 so your ears bleed' epic way, nor the Arcade Fire approach that involves lobbing a kitchen sink filled with a 30-strong Hungarian choir at the mixing desk stylee. WWPJ have utilised their limited means to create coherent, textured layers that enhance their songs. At times the resultant wall of guitars and cymbals create a punishing crescendo, as to whether they could replicate the album’s impressively rich sonic atmosphere beyond the studio doors is another question.

Upon consumption it is likely that those who salivated uncontrollably over WWPJ’s undercooked debut will now break out the rucksack and Kendal Mint Cake, scale Mount Sinai in an attempt to make the previously uninspired non-believers repent. They’d have some justification.

The Edinburgh quartet still ply their trade in angular rhythms augmented by bursts of ferocious noise, a musical approach reminiscent of The Futureheads before North West art rock bubble burst. Though in place of the endearing Ritalin defying four-way harmonies WWPJ have Adam Thompson, who sounds like an impressive choir boy - possibly doped with steroids leftover by the Chinese female swimming team from the early Nineties.

Overall it is an accomplished record. With the standout tracks being ‘Through The Dirt And The Gravel’, ‘Pear Tree’ and ‘Act On Impulse’. With the latter being a particularly impressive calling card. Yet even though they dominate the album, such highpoints don’t paper over all of the cracks. At times the song structures’ dependency on noisy instrumentals does become predictable, while the lyrical preoccupation with 'bad' weather is another gripe. Such grumbles, as well as the guitar line in ‘Circles And Squares’ that unintentionally (or not!) rips off Coldplay’s ‘Fix You’, mean that this isn’t the best record of all time, but it is the best record WWPJ have made.

The main problem is that, as they’d surely admit themselves, there isn’t anything that unique or radical to grab your attention. Not that you expect every band to pull a rabbit out of their arse, but a bit more variety and surprise would be appreciated. None of this should detract too much from what is a strong album with superb production values. And ultimately if they can match the improvement between records that is exemplified on In The Pit Of The Stomach for their third album, they’ll be doing very well. A step forwards, if not a giant leap.