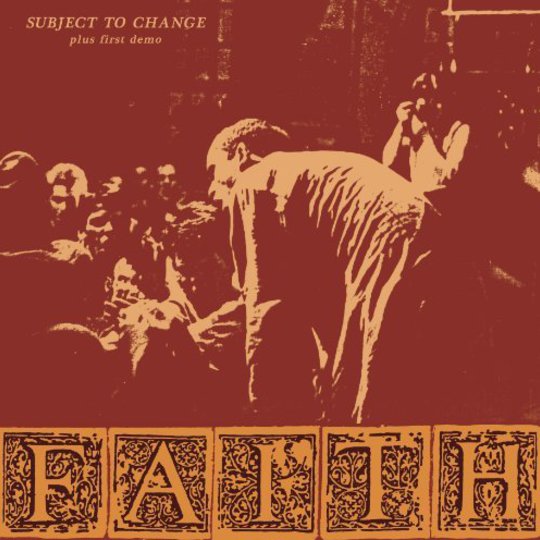 In attempting to figure out what a bunch of songs from the early Eighties mean in 2011, allow me to start by quoting a statistic from 1997 or thereabouts. At this time, the Minor Threat discography on CD sold between ninety and a hundred copies on an average day, or upwards of 30,000 each year – according to Ian MacKaye, who sang on each of its songs and founded Dischord Records, who released it. This was at a time when Dischord were investing in new, or at least contemporary, bands on the reg; since the beginning of 2010, they’ve released precisely two non-archive albums. Even in the golden age of the compact disc, only the label’s heritage kept them ticking over, so it’s hardly surprising that almost all their energies now go into excavating their foundations, of which Faith are a sturdy and significant piece.

Although the vast majority of hardcore bands past, present or future would bite your hand off for a legacy as respectable as Faith’s, in the context of the early Eighties Washington DC scene few give them top billing. Minor Threat are the standard-bearers, token hardcore album in thousands of collections worldwide; Rites Of Spring are the Dead Sea Scrolls of emo; Void, who shared a split LP with Faith in 1982, are weirder and creepier and liable to be lionised by those who came to hardcore from the avant-garde or chaotically crusty side of town. Subject To Change, eight songs in 14 minutes and the focal point of this release (the other 11 tracks feature their first demo, recorded in 1981), wasn’t the fastest or hardest or most militant missive bearing the Dischord logo when it came out in late ’83. However, this wasn’t a disadvantage per se – indeed, it chimed with a scene that was fast leaving behind the hyperspeed barking and pre-emptive fistfights of its collective teens.

Unfortunately, by the time it was on shelves Faith had split up – like nearly all the Dischord roster until Fugazi, their M.O. seemed to be to throw body and soul into the band for a couple of years, until it snapped under the intensity. You’d be a contrarian to deem this EP insincere, or holding anything back. Alec MacKaye, Ian’s younger brother, is keen to point a stringent finger at himself, his peers and society in roughly equal proportion: “From time to time my ideals change / The thoughts I’m thinking rearrange” (‘Subject To Change’); “Inspiration’s thin these days / With everyone going their separate ways” (‘Slowdown’); “What kind of world is this / When I have to fight to be” (‘No Choice’). Less obviously keen to bundle a subculture into his lyrical outlook than his sibling, the Faith vocalist appears to be edging towards a ‘the personal is the political’ kinda stance here, although he’s not exactly a giant of verbosity.

Musically, the difference between the band on the ’81 demo and Void split (most songs on the former were rerecorded for the latter) is the addition of a second guitarist, Eddie Janney. This spurred them into exploring melody, and while Janney and Michael Hampton are still clashing and staccato, Subject To Change deserves to be thought of as one of the first melodic hardcore records, as significant to the form as Bad Religion or the Descendents. Dag Nasty’s Can I Say would sound markedly different without this precursor, as would the first three (at least) Fugazi records. Rites Of Spring and Embrace, too, but as they formed from Faith’s dissolution that’s hardly knowledge dropped. In short, there are probably a few dozen Eighties hardcore albums you ‘need’ to own before Subject…, but even if it necessitates the long haul, at some point you should arrive here.

The demo, meanwhile, is the sound of a high school-age band who were still, essentially, making a genre up as they went: the quartet featured two members each of SOA and the Untouchables, both among the first DC hardcore outfits. MacKaye’s vocals are deeper and raspier, as if overcompensating; Ivor Hanson’s drumming rarely deviates from a sped-up polka beat and ‘Don’t Tell Me’ isn’t a cover of Minor Threat’s ‘I Don’t Wanna Hear It’, but might as well be. That said, the slow, menacing parts of ‘Confusion’ suggests Black Flag’s Damaged had found the band’s ears that year; as hardcore pioneers, Faith might be in Flag’s slipstream at best, but they did a lot of important stuff before other folks came along and became more famous off the back of it. Their dues: give them.