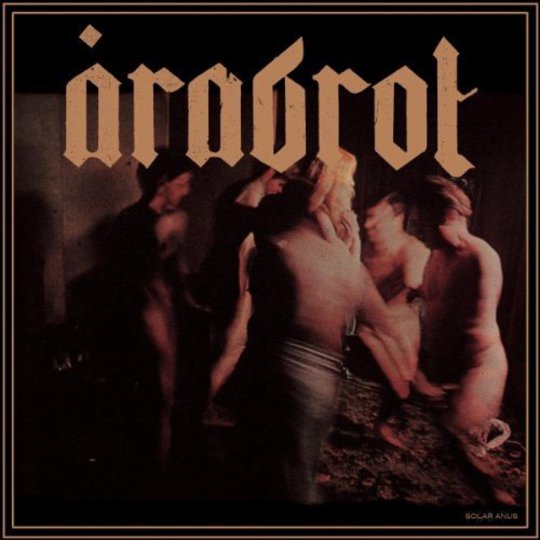 "It is clear that the world is purely parodic, in other words, that each thing seen is the parody of another, or is the same thing in a deceptive form."

Solar Anus. SOLARANUS. So-lar-an-us. So Laran Us. Have you ever noticed how words become meaningless with repetition? Say something over and over and over again, and eventually the noises become just that - noises. Any sense of association is expunged, and you're left with melodic grunts that make you feel like a neanderthal discovering language for the first time.

That's what I did when I heard the name of this album. Solar anus. The arse of the sun? What could it mean? Is it just noise, or something more? It's also a question you can level at Norse noiseniks Årabrot. Solar Anus is their fifth album, the previous four of which have got progressively louder, and darker and more colossal. Have they gone too far? Are they just making meaningless noise?

"When I scream I AM THE SUN an integral erection results, because the verb to be is the vehicle of amorous frenzy."

Hardly. The Solar Anus is not a nonsense phrase; it's a text written by the French surrealist Georges Bataille, juxtaposing and intermixing the purity of the sun with the filth of earthly life. With that in mind, Årabrot's fifth makes perfect sense. You see, this album reunites the band with one Steve Albini - purveyor of the finest surrealist punk via Shellac. Combine that with Norwegian lunacy and we're in for a treat.

Eight-minute-long opener and title track 'Solaranus' doesn't let us down, either. It kicks off exactly as you hope but nothing like you expect, with taut chainsaw chords superseded by piledriving slabs of downtuned noise. When the vocals kick in - which make liberal use of the recurring motifs in Bataille's story - the sun, gold, the equator, shit and fucking - it turns into a stream-of-consciousness epic that carries you away.

"A man gets up as brusquely as a specter in a coffin and falls in the same way."

This is an album that benefits from being listened to in order. Each song builds upon the last, an irrepressible steamroller of sound. Årabrot have styled themselves the 'Norse gods of noise rock': that's never more true than on third track 'Madonna was a Whore'. It honestly sounds like it's being addressed to us from the top of a mountain. It sounds like thunderstorms, like the grim, ferocious god Thor given audible form.

In fact, it's hard to believe that this colossal assault of noise was recorded in a bare-bones setup: just drums, vocals and a baritone guitar, with added electronics on certain tracks (notably 'Solaranus' and closer 'The Wheel is Coming Full Circle'). Kudos must go to Albini for this feat, but singer/guitarist Kjetil Nernes also makes the album with his vocal range - from guttural roar to nasal whine, there seems to be nowhere this man's voice can go.

"The sea, then, has played the role of the female organ that liquefies under the excitation of the penis.The sea continuously jerks off."

'Valkyrie' pummels you like a song called Valkyrie should: Vikings would have listened to this on their longboats, off to rape and pillage northern Europe. 'Auto Da Fe' meanwhile, just sounds like an unstoppable juggernaut, out to run you down. By the time you get to 'The Wheel is Coming Full Circle', you feel like you've been through a cathartic nightmare, and the steadily rising guitars somehow sound like daybreak - like the sun is being pulled out of its own arse.

"The terrestrial globe is covered with volcanoes, which serve as its anus.Although this globe eats nothing, it often violently ejects the contents of its entrails."

This album is ferocious, funny, colossal, guttural, hopeful and terrifying. It's a tidal wave of noise from few hands. Like its title, it's a contradiction, a dichotomy, a triumph. It shouldn't work, but it does, infinitely well. It's art from the lowest of sods. It's a fucking triumph.

*Quotes from translation of Solar Anus by Georges Bataille