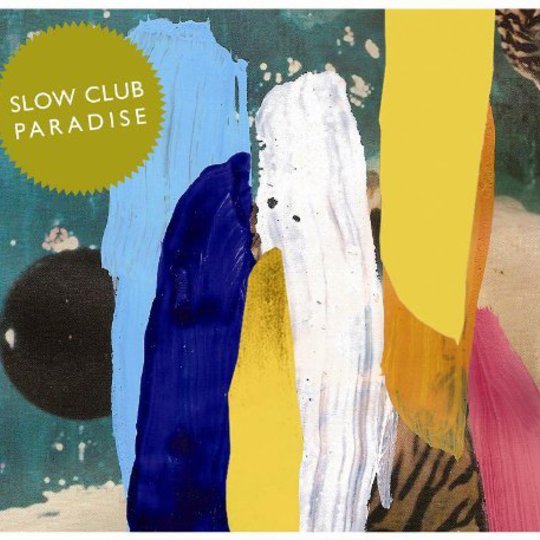 Slow Club’s debut album, 2009’s Yeah So, was everything you’d have expected from South Yorkshire’s definitive twee-folk duo, famed for their lively, shambling choruses and their use of a wooden chair as a piece of percussion. It split opinion. There were those who were energised by their delicately anarchic clashes of classic and bespoke arrangements, frivolous and sentimental lyrics, folk, pop, soul and rock‘n’roll hooks. And undoubtedly there were those who found the band’s whole approach to be clumsy, mushy, even unprofessional – and just a bit annoying.

That latter camp can’t have spent much time with Yeah So though, because for every riotous, in-your-face pop song like ‘Giving Up On Love’ there was the piercing, naked emotion of ‘Sorry About The Doom’ or the despondent resignation of ‘I Was Unconscious, It Was A Dream’. In other words, in amongst Slow Club’s upbeat singles, there have always been some astonishingly elegant, despairing and unequivocally beautiful songs.

It’s on this sincerely sad trajectory that they continue with Paradise. Heartfelt laments of failed relationships and dying relatives dominate the tracklist, as even the grandest arrangements are shifted out of focus and firmly out of Slow Club’s typical twee-folk bracket. A set of energetic pop songs, this certainly isn’t.

Take single, ‘Where I’m Waking’, one of Paradise’s more positive moments. Rebecca Taylor’s vocals swoon downwards, as where once there would have been rapid-fire quirky rhyming couplets, she wearily claims, “I can see you looking at me / You’ve got the brains and I’ve got the body”. The chorus has an energetic jerk to it, but the words are muffled and brief, no longer resounding and confident. It’s enormously catchy, but you can’t imagine crowds of teenagers yelping along to these lyrics al la Slow Club’s earlier singles.

It encapsulates the way in which Paradise is far less direct than its predecessor, and far more melancholy. In fact, from the gorgeous staggering percussion and stumbling hymnal piano of opener ‘Two Cousins’, the gloom is almost relentless. But what’s impressive is the way the record never depresses. ‘Never Look Back’ is desperately hushed, but there is a strange funkiness in Charles Watson’s guitar that gives the song life. And when Rebecca sings, “In a second I’ll be gone and you won’t have to think”, over a hazy electric guitar on ‘Beginners’, there’s a defiance in the song’s pulsating drums that fills you with unexpected hope. It’s the same feeling you get when a few creaking chords cut through the pointed bleakness of ‘Gold Mountain’. Even the album’s quietest, most sombre moments (‘Hackney Marsh’ and ‘You, Earth Or Ash’) are more likely to make you cry tears of joy than sadness, they’re that beautifully performed.

A secret track excepted, Paradise closes with ‘Horses Jumping’ – Slow Club’s most ambitious song to date. Over the course of six-and-a-half minutes, Charles’ meticulously finger-picked melody sprawls out into a plinking piano and a sleepy violin, like Bright Eyes at their most countrified and soothing. It’s an important suggestion that, even though Slow Club have found a more cohesive formula on Paradise, there’s still plenty of ground they’d like to cover.

For now though, Slow Club can be immensely proud of Paradise. It follows on from Yeah So in its combination of danceable riffs and tear-jerking ballads, but here the distinction between the two is not stark. There are still plenty of catchy songs, but they are performed with a great deal more composure, which should satisfy the sceptics who were turned off by the duo’s brattier early material. These songs rest quite naturally between the forlorn, heartbroken ballads, making this an album of exceptional and understated maturity and beauty. Sadness has rarely felt this good.