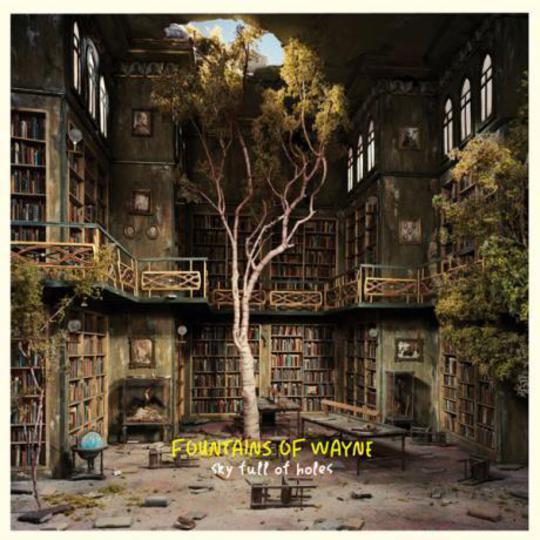 Fountains Of Wayne weren’t always this boring, were they?

Unintentionally or not, with Sky Full Of Holes they have produced the equivalent to the soundtrack to a laugh free Sandra Bullock rom com. It’s a demographic straddling sonic snore-fest that simultaneously caters for everybody and nobody.

Songs about ordinary people, real people, people on hard drugs and people on soft drugs. Dying in wars and not dying in wars. Then there’s some other people opening a boutique. To be fair, FOW can paint pictures very well. It’s just that these aren’t the most interesting pictures.

Sporadically scattered throughout the album are lyrics that’ll make you prick up your ears and temporarily arise from your comatose state. There is the downtrodden family man of ‘Action Hero’ who is blunted by domesticity - “He is on his hands and knees, he is searching for his keys in a small Vietnamese place on East Eleven Street, his daughters both at once say ‘can we just get going please’, as his wife begins to sneeze, and his son is throwing peas and eating with his feet.” You can visualise the ensuing family squabble. A short film transported into your head. Just a shame it isn’t a silent movie, because I keep on getting distracted by the inoffensive music-by-numbers in the background.

‘Radio Bar’ sounds like the theme tune for an early morning TV Show. Chipper, innocuous and annoyingly upbeat, with a meathead chorus of “Whooah, Oh, Oh, Ohs” thrown into the mix. There’re hints of country & western on ‘A Road Song’ and ‘Workingman’s Hands’, but on the whole we’ve got the guitar-based power pop that has been FOW’s trademark.

It’s not the worst record in the world. You can listen to it all the way through without anything too bad happening. It’s perfectly pleasant, just really, really, really, really safe. I guess in the middle of the road they’ll make more money out of Father’s Day presents, or as a leaving gift for the secretary that you worked with for ten years but never actually spoke with beyond saying “Hello”, 'Goodbye' and 'Can I borrow a pen?'. You don’t want to seem cheap by just signing the surprisingly large Hallmark Card, but you can’t get her flowers because you’re pretty sure you heard her mention something about allergies when eavesdropping in the break room a few weeks back – and inevitably they’ll die and bring back memories of her late dog. It’s a can of worms. Do we hug? A peck on the cheek? I don’t normally perspire this much. I’ll just plump for the Fountains Of Wayne CD. That sums up our relationship perfectly.

Album closer ‘Cemetery Guns’ encapsulates the failings of Sky Full Of Holes. Potentially the song is a hard hitting social commentary focused on the untimely death of a soldier. On paper a harrowing portrait of the “Blue war widow” crying at the deceased’s graveside. But where Springsteen would make you cry, then march on the government, FOW don’t. Maybe it is a harsh comparison. Nobody’s perfect, and The Boss was also guilty of the odd duff song too, but he’d usually pull it off with passion and charisma. FOW just seem go through the motions. No sweat. No tongue in cheek either. All you get is a dumb sing-along chorus of “Cemetery guns go bang, bang, bang.”

Really, is that all they’ve got now?