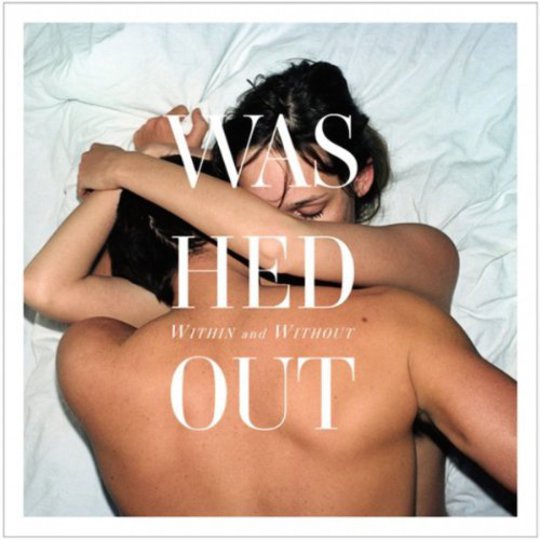 By way of an introduction, it would seem pretty important to address those who may have been living under a blog-shaped rock for a little while now. You may well have seen ridiculous genre names being bounded around, emerging from a completely nonsensical scattering of compound musical nouns. 'Chillwave' has, by far and away, been one of the simplest to pour scorn upon, a crude lumping together of a generation of electronic producers focussed on bringing out their love for esoteric, sampled pop music. The likes of Chad Valley, Neon Indian, Toro Y Moi have all had the tag thrown their way, but have managed to - at least for now - swat this unwanted moniker away with a prolific onslaught of material that has seen their fan bases grow and grow. But it is Ernest Greene’s Washed Out that has not just stood out as one of this new movement’s star players, but also a man who has had no qualms in taking time in finding his feet, only now finally releasing this, his debut long player, Within and Without.

With last release the Life of Leisure EP getting its first official release back at the tail end of 2009, it could have been so easy for Greene’s music, given the environment it parades in, to have stagnated. His sound was there to have ‘dated’ written all over it (somewhat ironically, given the intrinsically nostalgic nature of it all). So statements are there to be remade. On first listens, the cascading, waterfall synthesisers of ‘Eyes Be Closed’ could show that not much here seems to have changed from that first, salivated-over EP. It’s only once the climactic break that you realise how much more calm and assured things have become. An anthemic burst of reverberated vocals and guitars engulf the muted intro and usher in a far more pensive yet completely assured sound.

It’s this new-found confidence that allows ‘Within and Without’ to prosper. Even when Greene puts the most conventional structures known to pop music under his lens, a rose-tinted magic appears. ‘Amor Fati’ bounds with a beautifully delicate strength in melody, even allowing for a somehow plausible combination of disco handclaps and faux-terrace holler "oh-whoa-whoa"s. Greene’s softly reverberated voice quickly proves to be an essential lynchpin to the whole thing, as demonstrated on ‘Soft’, where his muted, romantic slurs are backed by an infectious backdrop of The Field-style sampling and a sultry, bass-led chorus. Hooks like these, the kind that somehow sit between the muted accomplishment and the utterly insatiable, demonstrate just how it would be nigh on impossible to punch holes into his simple aesthetic - Ernest Greene is a writer of good quality pop songs, it’s as simple as that. Regardless of any influence or heritage or retro-futuristic style of sound, in the space of this (admittedly short) debut album, he displays an innate and admirable ability to swerve any pigeonhole by letting the strong songs bat such nonsense away.

While it could have been so easy for him to surf down the watery banks of obdurately happy-go-lucky, blue-sky musings, Greene proves to be just as content in flaunting an introverted, darker side here that demands as much praise as anything of the more sunnier ilk. ‘Far Away’ sits as comfortably the finest example of his dexterity, balancing driving drum breaks with soft, seductive chimes and drawn out string sections befitting of a young romantic seemingly downtrodden by some vulgar. The introduction of Charlift’s Caroline Polachek, with her ghostily lovelorn wails on ‘You and I’ proves to be another masterstroke of darkly romantic connotations, before she leaves Greene to his affably vulnerable self in verses of downhearted harmonies and hypnotic, repetitive signal sounds on the title track. All of this goes to show a young man more suited to the more mature singer-songwriter tag than the hip vagueness of a daydreaming, surf-loving bedroom producer, and so it goes with closer ‘A Dedication’ – a drowned-out, gramophone anthem of hissed out pianos and Greene’s now-soaring vocal.

By the end, both he and we know that there is certainly more that could be offered. There are even points when you can tell the man himself seems confused by the ease of it all, with ‘Before’ a lull in proceedings, Greene sounding almost bored as the mutated horns and micro-sampled Nineties cubist vocal swim around him, proving that not even he can completely escape the confines of his sampled character. The cracks in that objective character are showing though – to be fair, they always have. Washed Out always stood above his supposed peers; the more he progresses out of his shell, the farther his voice will soar clear of the soon-to-break wave of generalised chillwave nonsense.