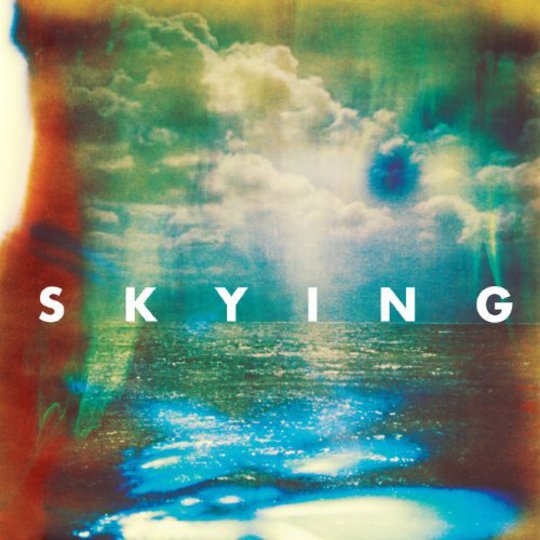 Ah, 2007. Landfill indie is swilling Carlsberg round its gob in a beige dressing room. Doltish dead-eyed gothed-up FAKES The Horrors have barged in and set up (Top)shop right beside them. At this point, whether through trying too hard or not hard enough, The Horrors are to many - this writer included - a shower of ludicrous bell-ends. Their firm status as style-over-substance band-of-the-moment is admired and reviled by fans and critics respectively, but accepted by all. The straight-faced Addams Family-understudies cop a roughshod blend of Cramps-y garage-punk vim and shaky psychedelic vigour; songs custom-built to sound every bit as preposterous as the band looks. Psychotic yet stylish. Delicately dishevelled. But after a fairly intense PR push, Strange House - a twitching, sacrificial lamb of a debut - drops limply into an ambivalent market. Even NME, the Southend-on-Sea quintet’s most ardent lifebuoy, ushers the LP quietly out the back door with a perhaps generous 7/10 review. The novelty factor departs; record label Loog, sadly, is not far behind.

For reasons best known to himself, Richard Russell, founder and head of XL Recordings, decides this is an ample opportunity to drag the leather-jacketed vagabonds out the gutter of gimmickry. In a curious display of gumption and blind faith, he offers a record deal. He's crazy, he's brilliant. Then - fuck knows, he must be some kind of genius - the guy makes an executive decision to appoint Portishead's Geoff Barrow as producer, with immediately astonishing and well-documented success. Faris' high-octane vocals are planed down and buried in the mix. Car-boot organ squawks are out; huge, glistening, trebly synths are in. 'Sea Within a Sea' instantly becomes the best thing since sliced bread (it still is, in fact) simply by splicing Portishead's 'The Rip' with the generic motorik beat of, say, Neu!'s 'Hallogallo and garnishing with a thin, Faith-era-Robert Smith vocal. Wide-eyed critics slaver like hungry dogs as they realise opportunities to tell everyone how they just love early Seventies experimental European music will surely soon abound.

And before we know it, Faris Badwan's Vatican-endorsed Cat's Eyes project empties its heart into an altar of gothic-pop passion, allowing Faris' manifest obsession with Sixties girl-groups to drown naysayers in breezy waves of dark harmony. To call the patently quite likable, knit-browed chap any description of gothed-up FAKE at this point would, for all intents and purposes, seem rather churlish, chippy.

And now we're Skying. It's been a staggeringly swift trajectory and The Horrors, it seems, have reached terminal velocity. Where predecessor Primary Colours unequivocally confounded non-existent expectations, this is a cushioned dive into the potential (but not irredeemable) MOR. The wafting chimes of lead single 'Still Life' are really secondary to the brilliantly antique treasures plundered elsewhere, but, like 'You Said', it wears its widely discussed Simple Minds influence tastefully: not so self-consciously weird as the Scots at their most experimental; less outrageously overblown than their most vulgar; and like a handful of others here, it's hoisted from the throes of plodding mediocrity by horns and synths and timidly soaring vocals, culminating in a positively rapturous and cynic-proof finale. Equally as intriguing are the 'chilled', funky, Baggy beats of stunning opener 'Changing the Rain' - but borrowed Hacienda nostalgia aside it's a straight-down-the-line update on pure, classic shoegaze.

Skying is a record of polar extremes boshed into close proximity. Withdrawn and welcoming; subtly bold; gently hyperactive. There's also a measured sense of fear in Faris' vocal, which clings to the powerful Barrow-bolstered backdrop - giving this a widescreen intimacy peculiar to The Horrors. Despite ditching the shy growl of Primary Colours for a firmer and throatier delivery, Faris sounds yet more distant, evoking in quieter moments a lost boy, haphazardly snatching for a melody to help lull himself to sleep. High water-mark 'Moving Further Away' again channels Neu! in an extended bout of Krautrock foreplay that bursts loose in a happy collision of richly emotional, robotic drums, and firework riffery straight out of Sonic Youth's Eardrum-Scraping Guide to Fret-Grind, Pigfuck Edition. If Krautrock originally soundtracked endless endless Autobahn, this is the beautiful racket of a sudden highway pile-up.

That's what makes The Horrors something of a minor national treasure in 2011: their relentless drive to drag the overt experimentalism of idiosyncratic Eighties icons kicking and screaming into the mainstream. I won't get into cod-philosophies, trite and tedious, on the importance - if not necessity - of giving bands time to grow into themselves, but suffice to say that while The Horrors arrived looking very much like a bunch of doltish dead-eyed gothed-up FAKES, that's probably the only reason they've made it this far. Having said that, I'll admit Skying leaves me perhaps more interested in where they'll go next, than where they are now; not so much deflated after Primary Colours as leveled out, cruising. But in such turbulent times, a steady smoothing of trajectory - before inevitably rising to the musical heavens - seems an eminently reasonable plan of attack. Bring on their 'Don't You (Forget About Me)'? Don't even joke.