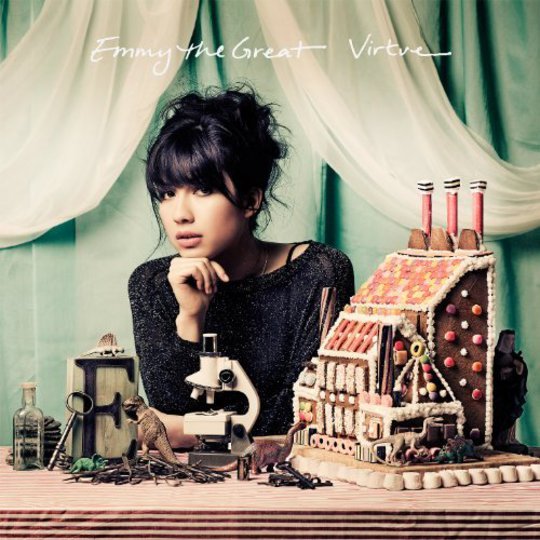 Emma-Lee Moss has always been wise beyond her years: it’s apparent in her songs, it’s apparent in her writings. Her talents lie in an ability to convey genuine emotion in an articulate, relatable, and, perhaps most importantly, self-aware way; she is endearing because she knows when to tug at the heart strings and when to be self-deprecating. And she wrote probably the catchiest song ever about a pregnancy scare.

Her second album as Emmy the Great, Virtue, shows that she has continued to grow as a musician and as a person. The album is a significant step forward for the solo-project-cum-collaboration (written and recorded with Euan Hinshelwood). It is every bit as lovely as First Love, but has a greater sophistication in arrangements and mixes. The acoustic singer-songwriter simplicity of the debut has been dressed up to emphasise Moss’s voice and take the focus off of the guitar twang. The expansive, pastoral sounds perfectly compliment songs about creation myths and the extinctions of giant, reptilian species. Where there have previously been cute, doo-wop backing vocals, now there are accents that sometimes take the form of gentle highlights and sometimes take the form of foreboding statements as if delivered by the chorus of a Greek tragedy.

It is also permanently coloured by Moss’s split from her fiancé. Knowing that this has informed the album does affect the listening experience, but the album itself does not convey sadness or self-pity. But it is where the mind goes back to when she sings to ladies in white or about needing to buy a dress.

Impossible to ignore are the religious undertones, contemplations again tied to Moss’s fiancé and his finding God. Moss’s declaration of being blessed despite her misfortunes on 'Paper Forests' is directly linked to the concept of the rapture, which is more timely than perhaps intended. The theme, though constant, is not heavy handed, and the allusions are quite a suitable pairing for the choral-styled backing vocals.

Mostly, Moss is singing songs to other women, whether they are named or not. There are indecisive girls, girls who have been abandoned, girls whose advice has been ignored, even the fated Juliet makes an appearance. Ultimately, this isn’t Moss working out her feelings in an extended therapy session; she has something to tell these women. She is sharing her experiences for all, and you’d do well to pay attention.