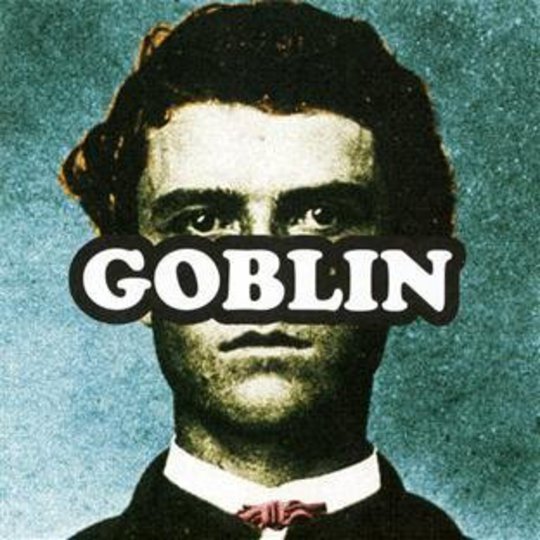 Depends on your definition of the word, really. Goblin isn’t a radical departure from any hip hop preceding its release – one can hear echoes of myriad artists/producers past and present in its DNA (Mobb Deep, Wu-Tang, The Neptunes, Nas, Eminem, Dre) – just as it’s not a significant step onwards from Tyler ‘the Creator’ Okonma’s solo debut, 2009’s ‘net-distributed Bastard. What is radical, after so many free-to-download releases from Tyler and his Odd Future (Wolf Gang Kill Them All) rap collective, is that this is marketed as an album ‘proper’ – one can step into their local high-street music store (assuming it hasn’t closed) and pick this up alongside two-for-one 30 Rock sets and second-hand Xbox games. That, more than any amount of blog buzz or magazine covers, is truly evidence that Odd Future’s leader has landed in the mainstream.

And arguably he’s done so ahead of his time. While Tyler’s catalogue of work is sizeable, his quality control is inconsistent, productions past ranging from the inspired to the utterly insipid. Stray from Odd Future’s sample-strewn Radical mixtape, missing-in-action rapper Earl Sweatshirt’s own solo effort and the aforementioned Bastard and the listener is swiftly adrift in a sea of mundane raps about questionable subject matters. At only 20 years old, Tyler’s breakthrough arrives before he’s had time to properly mature as a producer – he hasn’t the behind-the-scenes experience of a Kayne or a Pharrell, and now the spotlight is blinding enough to possibly tempt him to stray from a comparable trajectory. He could be the equal of them, that’s clear from just a cursory listen to Goblin; right now, though, he’s walking a very fine line between genius and the grotesque.

Odd Future’s lyrical content has been the subject of immense scrutiny, and writers elsewhere have already explored the themes of Goblin in great detail. But nevertheless, it must be mentioned. So, long story short: Tyler writes about things that other rappers might shy away from; he outlines them as fantasies, and states that everyone has dark thoughts from time to time; but he never convincingly qualifies his talk of rape and turns of homophobic phrase. Disclaimers are dispatched, but almost as afterthoughts, pre-empting the inevitable furore and fighting back with blunted blades produced from grotty back pockets. Obviously Tyler and his cohorts aren’t rapists. They’re kids being kids, shooting shit and boasting about conquests that probably never happened, using language which can be incredibly offensive. In the company of friends, that’s cool. But Tyler is playing a dangerous game now that millions have joined his inner circle – curbing the language, but more importantly dulling the thematic knife-edge upon which these songs balance, will set him in good stead to follow his idols into mass markets.

If he wants to, that is. He states that this is music for the man in the mirror, rather than the masses, and one can read that two ways. Perhaps it’s meant to simply suggest that he makes this music for himself and his friends, which is how Odd Future (and any band of musical brothers) started. Or, it’s for the other side of these individuals, for the flip within us all, features reversed and letters running backwards. The idea that Tyler’s music is made with this alternative reality in mind does hold water: perhaps dark side of the psyche is wrong, but it’s certainly crafted to appeal to its twisted parallel. That doesn’t mean it’s right to say everything that he does, but Tyler’s assertion that he’s effectively in character throughout this record (and Bastard – both play out like a therapy session, our protagonist playing Tony Soprano to a gruff-voiced Dr Melfi) would appear to bear scrutiny. That Goblin is limited in conceptual scope is indisputable though, the frequent references to suicide – not the actual act, but the thoughts of – and sexual violence growing wearisome across 15 tracks (even if one is an instrumental). Misery loves company, so they say, and sure enough Tyler’s woe-is-me musings have attracted (and maintained, so far) the attentions of millions.

He’s unlikely to be remembered chiefly as a rapper, despite some fine wordplay peppering this release. The absorbing 'Yonkers' – half as mesmerising when separated from its video, but still capable of holding the listener with vice-like force – is a torrent of stylish syllables, spat savagely by an individual who, quite genuinely, sounds as close to the edge as one can get without tumbling into the chasm below. 'Sandwitches' is fine, too – but that both of these cuts were widely circulated ahead of Goblin’s release does rather lessen its first-listen impact and overall longevity. Tyler’s future, odd or otherwise, would seem to be in production. Goblin bubbles forth cues from the RZA’s steely beats, and The Neptunes’ silken funk is evident – 'horrorcore', whatever that might be, seems in short supply, as there’s nothing unsettling in these arrangements. In 'She' – the album’s softest, most commercially immediate offering, featuring a fine guest turn from ex-Def Jam artist Frank Ocean, now a card-carrying Odd Future member – there’s even a trace of The-Dream’s seductive soulfulness. One can easily picture Tyler at the controls, working his minimalist magic for an established chart-botherer. He claims he’s not interested in money – what he needs he gets for free, et cetera – but also mentions that he’d like to be able to support his mother. Surely, in the desk-manning direction do dollars wait.

What came across as playful, despite the graphic intensity, on Bastard is just nasty here – 'Transylvania' can be cut from anyone’s iTunes version of this record. There’s no place for the more extreme side of Tyler’s worldview now that he’s made the transition from cult meme to cross-cultural phenomenon. But cast its most unsavoury numbers aside, and Goblin’s a very listenable, very well realised album from an artist whose career is only getting started. It’s no Illmatic, no 36 Chambers, but what is nowadays? (The era of truly unprecedented rap debuts must be behind us, as affordable technology allows anyone to crack on with beat-making to accompany their rhyme-stealing.) One hopes that its maker can chill a little once this record’s promo cycle slows down, take a step back from the coalface of hype, and really nail a definitive statement of intent come album three (titled Wolf, expected in 2012). There are muddled, muffled messages here, whispers of golden horizons and awards cluttering the shelves; it’s just a shame that the filler is so predictably repugnant and the brilliant gems so widely scattered. Radical? Not yet, kid, not quite.