The Body of Christ and the Legs of Tina Turner 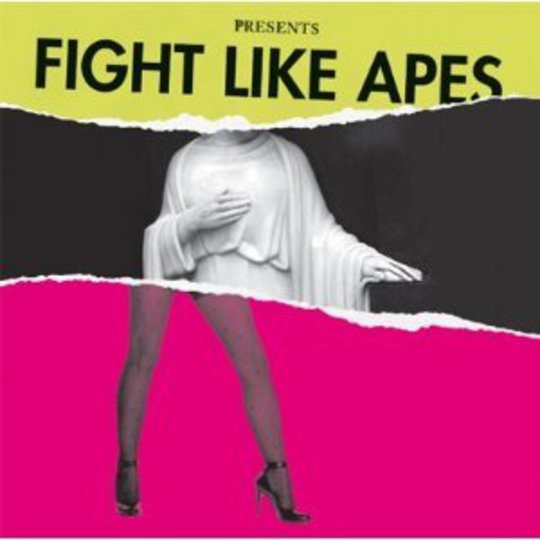 Fight Like Apes are very good at coming up with titles. If The Body of Christ and the Legs of Tina Turner doesn't strike you as a particularly good name for an album (although it obviously is), try some of their song titles on for size: 'Pull Your Arms Off - Let's Play in Your Blood;' 'Waking Up With Robocop;' 'Ice Cream Apple Fuck;' 'Kathmandu (Face it, You're Caviar, I'm Hot Dogs)'. Can the songs possibly live up to their names?

In the five years since they formed, the band has developed a reputation as great live performers, toured with acts as diverse as The Ting Tings, Kasabian and The Prodigy, released one previous album (2008's Fight Like Apes and the Mystery of the Golden Medallion) and a few EPs, and been named the fourth best Irish musical act of their generation by The Irish Times. Yet the Dubliners remain relatively unknown in the UK - The Body of Christ..., produced by Gang of Four's Andy Gill, could help to change that.

Opening track 'Come On, Let's Talk About Our Feelings', a three minute bitch about over-sharers, passes by without making a huge impression, but thankfully gives way to the far more interesting 'Jenny Kelly', one of the album's highlights. A Google search reveals that Jenny Kelly is the name of an Irish radio personality, and also the the heroine of Australian sci-fi childen's s TV series The Girl From Tomorrow; given that this is the band that released Jake Summers, tribute to the California Dreams character of the same name, it seems likely they're talking about the latter. The tone is vaguely melancholy, but it builds to infectious singalong refrain of “Goodbye Jenny Kelly/You're my friend” that's simultaneously joyful and heart-breaking thanks to MayKay's soaring voice.

Elsewhere, as is so often the case with Fight Like Apes, the lyrics mix humour and aggression to cathartic effect. Something close to a mission statement comes along in 'Ice Cream Apple Fuck', the last song on the album, when MayKay sings “I will not take your shit you skinny cow/So let's grab a rope and drag it all out.” Opening old wounds and digging around in them for laughs is almost the band's stock-in-trade. 'Pull Off Your Arms And Let's Play In Your Blood', one of the slower songs, features the tremendously angry lines “My well-read friend informed me that I was a cunt/Well it's her own cunting problem, it's not my fucking problem I'm dumb,” while 'Indie Monster', a hilarious burn on know-it-all music snobs, issues a disarmingly forthright request: “Stop breathing. I want you dead."

However, a few of the tracks are less effective. In 'H + Z5 Together At Last', the music fails to carry some obscure lyrics about brain eating zombies, and 'Captain A-Bomb' misjudges how much “quirky” can be got away with before things turn irritating (rhyming “Kylie's Greatest Hit Songs” with “ding dongs” is pretty unforgiveable).

Much like Mystery of the Golden Medallion, ...Legs of Tina Turner is a mixed bag. When it's good, it's very very good, and when it's bad, it can veer from dull to irritating and back again over the course of a single verse. Thankfully though, there's enough of the good to make this a hugely enjoyable album overall, and more than deserving of your attention.