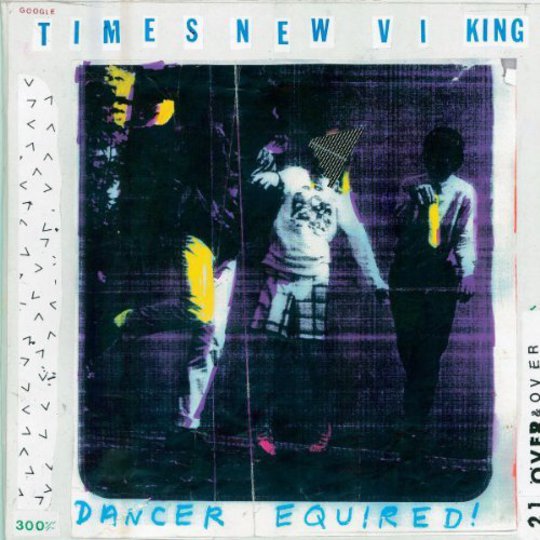 By now it shouldn't be necessary for every review of a new Times New Viking album to mention how lo-fi, abrasive and plain noisy they are, but how underneath that blanket of noise there are exuberant pop-songs, par excellence, just champing at the bit to hook you with their...well, with their hooks. Well, it wouldn't be necessary to mention that, but for the fact that they've only gone and cleaned their act up. For it's true, Dancer Equired dials back the distortion - not all the way of course - but the guitars at least have a texture that betrays the actual playing of strings as opposed to the corrosive amplified screeches that dominated Rip It Off. However, this shouldn't come as a complete surprise - last record Born Again Revisted was a move towards a cleaner sound, if only ever so slightly.

Album closer 'No Good' is a step even further away from TNV's trademark distortion, played as it is entirely on acoustic guitar, but the whole track is drenched in a phased effect that amplifies the minutiae of each strum and every vocal cadence, rendering the song at once charmingly fumbled and delicately ethereal. It's a subtler take on their old rawness, but in this sense is closer to their usual obfuscation than the melodic directness of 'Room To Live'.

While those two tracks stray far enough from the template to be considered stylistic diversions, most of Dancer Equired is a considerable clean-up of their sound, but otherwise business as usual. While the extent to which they've cleared away some of their sonic detritus signals some degree of change, in terms of tunefulness TNV are in no need of change. Unlike some of their contemporaries, TNV have typically used noise and lo-fi production in a manner that has obscured their melodies, but the melodies were always there. They've rarely used noise to compensate for a weak hook, or underwritten song. There is no doubting, however, that the increased production values here render these melodies more accessible for those who may have previous found previous albums unpalatable, or perhaps too much work. It is also allows the trio to showcase their musical chemistry more effectively, as is apparent from opening track 'It's a Culture'. There are no fancy tricks, but with a little bit of stereo-panning (distorted jangle to the left/clean chime and then keyboard to the right) the group really opens out. It's particularly useful for emphasising how complimentary the voices of Murphy and Elliot really are to each other. It isn't all used to conventionally sweet effect either. The contrast between Elliot's near slacker drawl and Murphy's distant wail on the pseudo-Buzzcocks referencing 'Ever Falling In Love' recalls the coy sexuality of The Vaselines in tone, if not in words.

As with previous efforts, the brevity of the songs mitigates the number present. Additionally, at 14 tracks Dancer Equired is at a glance their second shortest record, with the added bonus that the cleaner production job makes subtler variances more discernible and the record as a whole a more varied experience. There's an audible contrast between the bubble-gum pop of 'California Roll', Murphy's nonchalant vocal turn enhanced by cavernous reverb, and the chugging riffage of 'Ways To Go', which is itself lightened by a twee organ line. The blisteringly trebley 'New Vertical Dwellings' and 'Fuck Her Tears' would be distinctly less hi-octane under the weight of layers of noise, but are instead searing and thrilling.

The obvious drawback to Dancer Equired is that Times New Viking have toned down, although not totally forsaken, the defining aspect of their sound. There are those who don't want the pop without the distortion, the hiss and the crackle. To those people all I can say is, yeah, maybe you won't like this record quite as much as you liked previous efforts. To anyone who found them too wilfully difficult before, give them another try. When you're a band of TNV's size, free from any intense expectation or hype, it could be quite easy to rest on your laurels and just give your fans what they want, at the risk of growing stale. However, in taking a little bit of a chance Times New Viking have lost only a little of what made them distinctive, but they've gained much in melodic and compositional coherence. It's called progress and they wear it well.