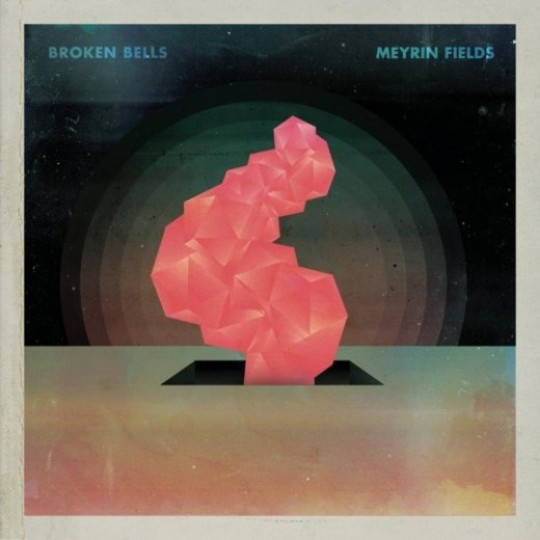 At four songs in length, Broken Bells’ Meyrin Fields certainly couldn’t be accused of containing any filler. Small and perfectly formed, this EP from The Shins’ James Mercer and Danger Mouse provides a welcome interlude in the wait for a new album. Which presents this listener with a dilemma: because for all the magic dust sprinkled across these four tracks, it’s difficult to shake the feeling that it could be more.

The songs on offer are slightly harder-sounding than the chilled-out vibe of the self-titled début, but not a massive diversion by any stretch. Out go the string sections and harmonising, in come squealing guitar hooks. Still in the dreampop family, but with a bit more edge. The title track, previously a B-side of single ‘The Ghost Inside’, kicks things off with an alarm bell of a guitar riff; it grabs hold so instantly that there’s got to be an opportunity for ringtone profiteering in there somewhere. There’s a certain sense of vengeful victory running through the track, paired with the lyrics turning the back on the perpetrator of an undisclosed betrayal, now stuck in the mud while the victim has ascended to greater heights: “Your tiny vengeful life might pass through my mind / But I blink and it's over”.

Elsewhere, ‘Windows’ has an intro straight out of a cheesy detective TV show, all plucked electric guitars and mystery vibes. ‘An Easy Life’ is probably the closest to their debut in terms of overall feel: driven by a mid-tempo thumping beat and acoustic guitar, it has a slight atmosphere of reggae gone very, very dark. And closing track ‘Heartless Empire’ is a wall of distortion, the crunchy guitars matched by Mercer’s vocal drenched in reverb. Also, it opens with a proper Muzak keyboard hook so wins pop points for that alone.

The songs are very good songs in any universe. So objectively, it’s all the more head-scratching that they weren’t given their rightful place within an album, instead being shuttled off to an EP. It’s too short to really get into as a body of work on its own. It’s not quite different enough, either, to be seen as a way of teasing a new direction, or testing fan reaction. If you weren’t already a fan, it’s unlikely this will convince you; by the same token, if you are a fan, there’s nothing likely to turn you off or give you that first flush of a new discovery, save for the excitement of a few new songs. That’s not necessarily a bad thing of course – new songs are always something to get excited over - but it does leave a slight feeling of ‘well, why did they bother?’

And then, of course, you realise that all of that is missing the point, which is merely to concentrate on the songs without dumping the expectation of hype on it. Nothing Broken Bells puts out is ever going to sound like the work of dullards. The combination of Mercer’s lyrics and indie-boy-who-can-actually-sing vocals, paired with Danger Mouse’s undeniable ear for awesome pop, means it’s always going to be well above average. Very good, in fact. Occasionally great. It doesn’t need to be anything else.