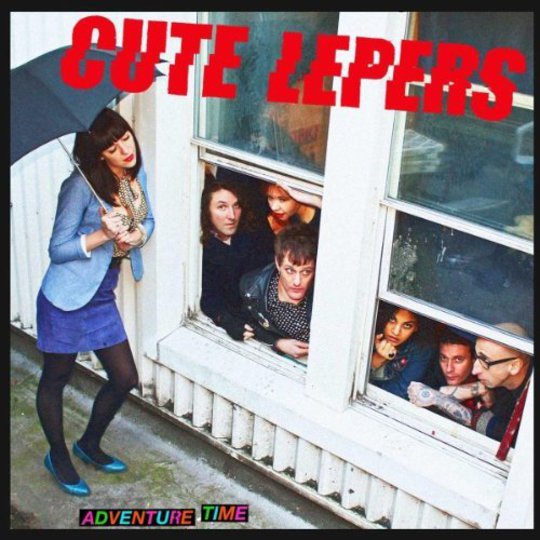 Seattle’s Cute Lepers make no secret of their influences, predominantly punk rock groups spawned in 1977. Not that you’d have to be Sherlock Holmes to work that out. It is pretty much written in capital letters on their foreheads. They even have a song called ‘77’ which captures what Cute Lepers seem to be about. Stuck in a time warp, enthralled by the past, pretending to be hanging out with Lemmy in Seventies London.

Cute Lepers are purveyors of the kind of songs a fictional band on a TV show like Gilmore Girls might play. Tattooed and pierced in all the correct places, yet underneath the Undertones T-Shirt and sneering lips it is actually quite safe.

Every song on Adventure Time sounds like it was constructed within a template that for some reason is always adhered to. Everything is uptempo. There is always a guitar solo. There are always backing vocals that echo the Buzzcocks. They do throw a saxophone and honky-tonk piano into the mix sometimes, which ain’t too punk in my book, but it doesn’t sound like Bruce Springsteen and his saxophone toting E Street Band. Which I’m guessing would be taken as a compliment by both groups. Also there are two tambourine players in the band. I don’t know if one is lead and one is rhythm, but for a band so keen on solos I was surprised the tambourine didn’t take the limelight at some point. At least there’s always someone available to run to the shops when band practicing.

‘She Liked Helter Skelter’ with its Charles Manson references, and lines such as ”Stabbed your mum, moved in with dad”, is the best thing on the record. Singer Steve e. Nix (I know) does his best Elvis Costello impression, and there is a catchy boy/girl call and response hook. Maybe it stands out because it is the closest they come to ripping up the rule book, veering ever so slightly off of their formulaic song structures.

‘Misdirected’ is a protest song about young people signing up for the Army, then getting blown to bits in far off lands. Presumably unaware that soldiers have to fight. They aren’t exactly subtle in conveying their message, but it is good to hear a protest song that isn’t performed by a smug git failing to be Bob Dylan.

On the whole, Adventure Time feels a bit sterile for a group of delinquents. Production wise it is quite polished, automated even. If it was a bit looser and messy, it might give it a bit more of the edge and personality that I’m sure is evident in their live shows.

The over-riding problem is that it is old skool punk rock. First time round this was impressive and energetic musical revolution. Thirty years, and countless bands later, you’ve got to do something special with it to stand out from the crowd. This record doesn’t really do that. To be fair, I don’t think they are trying to do this. It would seem their only ambition is to get into their own record collection. It is a straightjacket that they have put on themselves. If they looked beyond their own self imposed horizons they could probably bring something better to the table. If you’re looking for a musical journey, keep walking. If you want an unchallenging pogo at a near constant bpm, then you’ll probably dig this.