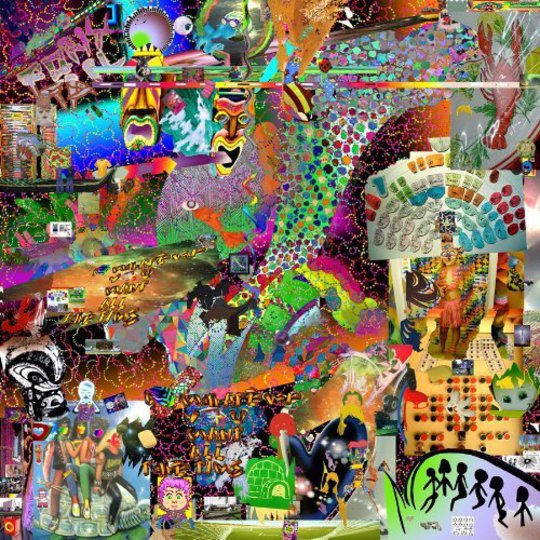 Listening to noise-pop four piecePonytail’s latest album Do Whatever You Want All The Time was a not dissimilar experience.

Both creations were undoubtedly an absolute pleasure to produce but stick mainly in the memory through the sheer displeasure of experiencing them.

Before we go on, some clarification needs to be made here. Any enjoyment derived from Do Whatever You Want All The Time will impinge on your personal appetite for music of the most experimental bent.

If a 37 minute trip through quick shifting time signatures, loosely coherent guitar rhythms and lead singer Molly Siegel’s random whoops and hollers sounds like your bag then there is plenty for you here.

It’s not the unhinged eccentricities of this Baltimore bunch that do them wrong however: their 2008 LP Ice Cream Spiritual was nothing if not a compelling listen, constantly fluctuating between a caterwauling shriek of rapidly scratched six-string and brief interludes of calm.

In contrast, its successor Do Whatever You Want All The Time bounces with significantly less ferocity between those two extremes and, as a result, is a whole lot more forgettable. By muting their one trick, Ponytail have seemingly stifled their raison d’être of tuning all amps up to 11 and committing a series of ADHD inspired freakouts to tape.

Worse still, without strident lashings of feedback to distract, the rigid song structures ingrained within Do Whatever You Want All The Time become acutely apparent.

Each track is defined by its tempo; most build from a slow crawl to the rampant speed of a psychotropic guzzling juggernaut before taking a brief breather and slamming on the accelerator again when the finishing line is in sight.

Variations are slight if discernable at all. ‘Easy Peasy’ flits along a rambling twee super-highway, ‘AwayWay’ features the informative Siegel’s squawks “I know, I know, you know, you know” and ‘Music Tunes’ enjoys a clanging match-off between metallic synth and frenetic percussion.

Where ‘Bondersville//Flight Of Fancy’ deviates towards more esoteric fare with its repetitive, trembling shrill of guitar and keys, this collective appear completely up unlistenable creek without their usual paddle of hollering crazy to steer the good ship Mescaline.

To truly grasp the vigour of Do Whatever You Want All The Time, do it yourself. Grab four mates, pick up some instruments and go nuts. Just don’t cut an album from the sessions.

Otherwise you’ll leave me in the same position as I was not three years ago in the dimmed confines of a make-shift cinema, trying to derive some sort of pleasure from a decidedly unerotic series of squelches and grunts. At least with the short film I didn’t have to watch it twice.