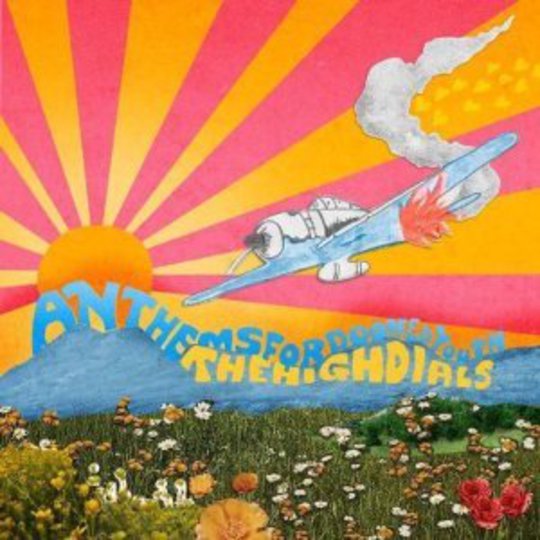 When you've toured with the Brian Jonestown Massacre and can count a former member of The Dears among your ranks, it's difficult not to expect some form of identity crisis emerging somewhere along the line. Sadly, throughout the collection of ten songs that make up Anthems For Doomed Youth we never get to hear The High Dials stamp their authority on proceedings and are therefore still none the wiser as to what makes them tick.

Having formed in Montreal eight years ago, they've spent the ensuing period developing a sound that pays homage to the past rather than looking to the future, hence the reason why comparisons with The Flamin' Groovies, Lilys and The Zombies have both helped and hindered subsequent progress. With three albums to their name, it's hard to imagine anyone but an absolute diehard fan of the band taking an awful lot of positives from a fourth, and despite numerous listens attempting to fathom out an original concept emanating from within, Anthems For Doomed Youth is merely a continuation of what's gone before, both from its creators point of view and their blatantly obvious influences.

Having Lilys producer and occasional keyboard player Mike Musmanno in charge of the album's recording process probably tells its own story. That's no slur on his proficiency when it comes to studio techniques, but hardly the catalyst for the new millennium's answer to Pet Sounds or OK Computer either. That said, when charged with trying to make a record sound as if it were made nearly five decades earlier, Musmanno duly obliges, and to be fair to The High Dials there are enough catchy melodies and mesmerising harmonies to suggest the potential to leave the retrogressive tag in the locker does exist.

Unfortunately, such bursts of extraordinary momentum are few and far between, such as on opener 'Teenage Love Made Me Insane', which stomps and kicks like a new born baby on its first nappyless voyage across the living room carpet. Likewise 'Bedroom Shows', which hints at what could (and probably should) have been a sturdy representation of the entire record yet for all its big hitting chorus line and melodramatic verse that sounds like Anton Newcombe fronting Girls, ends up being the final parting shot on an album dogged with far too much filler in between.

While being competent both musically and vocally, there's little to get excited about here from the perspective of the songs, and even when they garnish the template with a hint of Apples In Stereo ('Uruguay') or a dash of Echo And The Bunnymen ('Chinese Boxes') respectively, it only serves to confuse the listener even more.

Some day, maybe the real High Dials will stand up without being overly in thrall to their influences. Disappointingly, Anthems For Doomed Youth isn't it - the drawing board awaits...