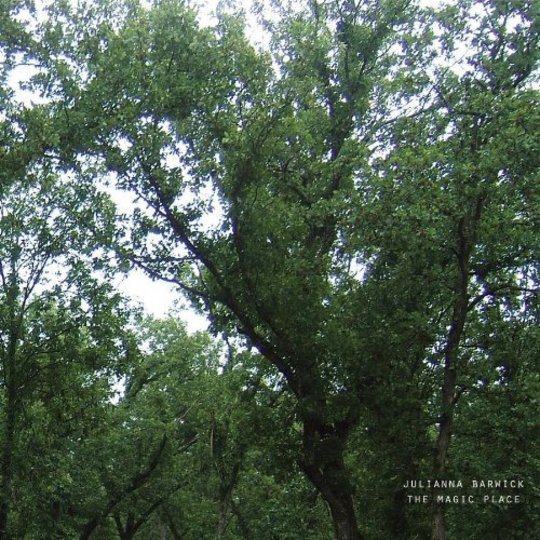 In The Magic Place, Julianna Barwick creates dense and luminous sonic architecture with just two main tools – her voice and a loop station. It's beautiful; something that shouldn't come as a surprise to anyone familiar with her previous releases, 2009's Florine and 2007's Sanguine. As with those albums, Barwick's looped, stacked choirboy vocals make The Magic Place lullaby-warm. Gorgeous harmonies echo into infinity, rubbing up against only each other, brief touches of instrumentation and occasional rumblings of static.

Its textural rawness gives The Magic Place a protective indie shimmer, without which Barwick might seem more deserved of the dubious title ‘the new Enya’, bestowed on her by The New York Times a few years ago. Barwick and Enya do share a penchant for channelling a Gregorian choir, cranking its pitch chipmunk-high and inflating the resultant numinosity with looping and reverb, but it's lazy to lump them together. I'm not even going to bother with a description of what Enya's music does – the mere words ‘Orinoco Flow’ are enough to get the dolphins prancing somewhere inside a dark New Age cavity of my mind. But I can see Barwick somewhere far less stale. Alone inside in a cavernous chalk-white church, maybe, where it's cold and bleak enough to need to create your own magic. ‘White Flag’ is a dazzling example of this – angelic voices tunnel up and burst from inside her; sunlight overwhelms the space. You get the gist.

There are complaints in some quarters that Barwick makes boring background music; that it's good for nothing but softly swaddling shoppers at Mothercare or Past Times. But that's just the curse of all ambient music, argued away when you consider context and perspective. Listen to The Magic Place in an attentive mood and it's pretty hard not to be transported. I listened to it at the office, loud on my headphones, and my surroundings became an incomprehensible cartoon. “You look like you're on another planet,” my boss said to me while I was indeed somewhere far away, whacked out on The Magic Place's stupefying glory, typing god knows what administrative shit in the meantime.

Where should I have been transported to, though? The Magic Place is influenced by Barwick's childhood spent on farms and in churches in Louisiana and Missouri. All sheep and a cappella choirs, according to interviews – all nature and transcendence. The closest I got to this feeling was ‘Bob In Your Gait’, a reminder of what crept up inside me when watching The Snowman on television as a kid. Cosmic awe in an accessible form. Spirituality pumped in via Aled Jones or his Brooklynite reincarnation. Well, however it reaches me and wherever it takes me, it's a feeling I hold dear – an almost-ecstatic assertion of hope, comfort and beauty in a world where this doesn't happen too often, and in an indie music scene where admitting you want it to can still be sneered at. But maybe we should court those sneers a little more.

My only qualm with The Magic Place is with its song structure. Each of the nine songs starts sparsely, weaves into an intricate texture, bulges with layered loops and then tails off. Each one's simple and mesmerizing, each one's a hit. But because they're all shaped the same way, it's like listening to nine takes on Eno's ‘Ending (An Ascent)’. The accumulation of layers might be sublime, but you always know where it's going. Only ‘Prizewinning’ bucks the trend, with the brilliant addition of a minimal techno beat charging away beneath those heavenly choirs of Julianna. Its crescendo submerges you in beauty – no surprises there – but the rhythmic pulse changes everything. There's less worship, more movement. And it's fascinating. Maybe there's a simple answer to any accusations of repetition hurled at Barwick's crystalline compositions: in the future, she needs to get craftier.

Akron/Family II: the Cosmic Birth and Journey of Shinju TNT