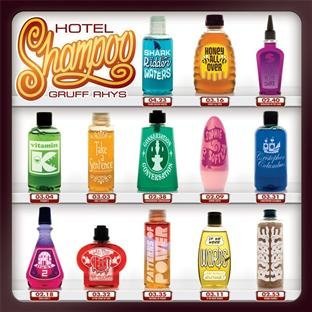 Most Gruff Rhys releases come with a grand concept or a silly idea behind them, only to reveal themselves as gently psychedelic indie-pop creations, and Hotel Shampoo is no different. »

gruff rhys checks in with third solo album, 'hotel shampoo', his most ambitious and fully realized yet. as well as the intentions above, 'hotel shampoo' is inspired by, and takes its title from, gruff's extensive collection of mini shampoo bottles and complimentary hotel products acquired whilst touring the world. 'hotel shampoo's reception desk and opener 'shark ridden waters' is a slice of kaleidoscopic, cinematic pop music produced by andy votel. a dozen equally sumptuous songs follow with gruff's highly original, cliche-free lyrics ranging over a wide spectrum of topics. uplifting, mariachi-tinged 'sensations in the dark' celebrates discovering music, eco politics is discussed on 'conservation conversation', colonization invades 60s style stomp 'christopher columbus' and 'patterns of power' touches on inequality over wailing, distorted guitar. love in it's various guises also features heavily - from sugar sweet 'honey all over', string drenched 'at the heart of love', achingly beautiful ballad 'if we were words (we would rhyme)' to 'space dust #2'; a tale of short-lived, seminar-sparked romance in the form of a duet with el perro del mar. in addition to vocals, gruff has played much of the instrumentation himself with the album mostly recorded in north wales before being mixed in la.
description from www.roughtrade.com