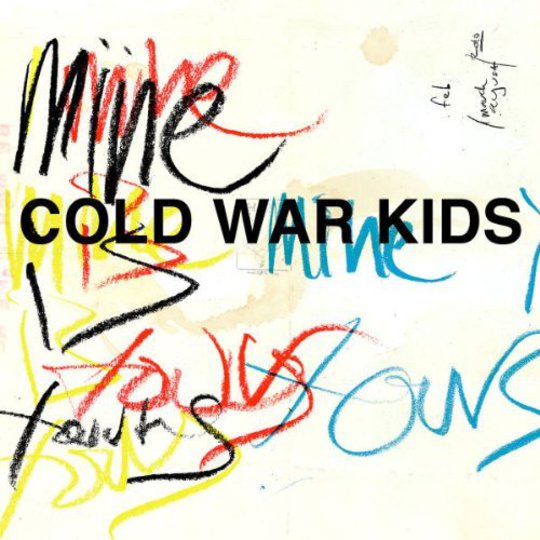 When I sat down to listen to Mine Is Yours, the latest efforts from Cold War Kids, my thoughts on what I had set myself up for were a little agnostic. As their first album Robbers and Cowards had received critical acclaim and hadn’t left my head phones or speakers for the best part of six months, playing on repeat ‘til the early hours of the morning and making my heavily mundane bus journeys in the mornings all the more enjoyable, rather than just counting how many flakes of dandruff were on the girl’s jacket in front of me.

It was the offbeat piano melodies, Nathan Willet’s screeching and sometimes whiny vocals about hanging him up to dry, and the implicit rawness which emanated from Robbers and Cowards which ruffled my feathers.

Like any fan, I eagerly awaited the follow up to Robbers and Cowards, which finally came after a two year wait. Loyalty To Loyalty, a record which started off with such promise with raw and aggressive melodies and riffs that had the potential to top their debut album.

Only it didn’t. It quickly became apparent that as the track numbers were going up, the level of creativity went down and all that was left by the end of the record were the slurs of a man who sounded too pissed to play the piano or sing, like the drunk fool who always features in the old cow boy films, attempting to play the piano in a salon, hiccupping his life away with an empty bottle of Jack by his feet.

So when the first strains of third album opening track ‘Mine Is Yours’ reached my ears I was pleasantly surprised. Unlike Robbers and Cowards and Loyalty to Loyalty, the Kids have taken a completely different angle on their music writing, taking a similar road to that of Arcade Fire’s The Suburbs by adding a slice of pop to their sound.

Now that doesn’t mean that this record is drenched in over elaborate production and irritating choruses. No, instead Cold War Kids have created a record which is a lot easier going on the ears than previous excursions, with ‘Louder Than Ever’ and ‘Finally Begin’ being at the forefront of this new direction in sound. Of course there are still their trademark stark, piano-driven tracks, like ‘Sensitive Kid’ and ‘Cold Toes On The Cold Floor’, which are reminiscent of the much better tracks on their debut, like ‘Rubidoux’ and ‘Hang Me Up To Dry’, proving that their unique style of sound hasn’t been lost and have executed each track on this record down to a big capital Tee.