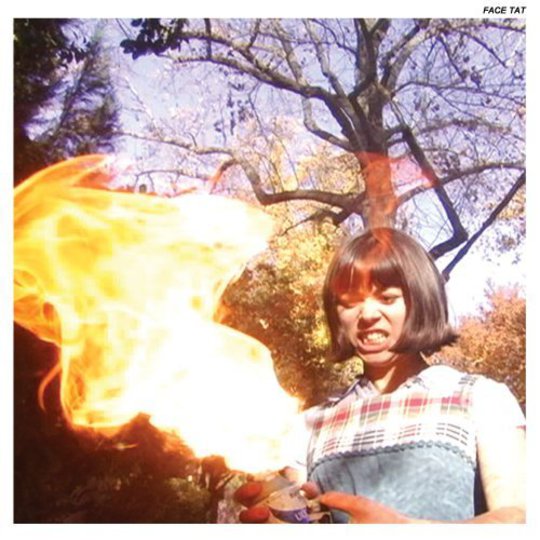 It’s probably fair to say that Zach Hill doesn’t really care what most people think of him. For anyone who’s seen the wildhaired and even wilder armed drummer live and in the flesh, it’s hard to think of a word that better describes him than ‘unconventional’. From the shattered and splintered crash cymbals littering his kit through to his whirlwind self taught kitwork, Zach’s a maverick. Whilst Hella’s back catalogue shows that Hill can batter the living daylights out of a set of drums, his first real solo longplayer, Astrological Straits showed that he could do a whole lot more than that, and was one of the surprise highlights of 2009, for this reviewer.

On Face Tat, Hill has somewhat refined and streamlined his previous efforts. But 'refined' isn’t quite the right word, if we’re being brutally honest. Astrological Straits showcased Hill’s devastating talent at writing convulsive, expansive compositions. In contrast, Face Tat, as might be suggested by the explosive cover art, is a more in your face collection of actual songs. If those songs had been recorded to tape, and then left out in the sun too long before being warped and bent back into shape. The point to make is that whilst Face Tat is rawer, faster and crucially more melodic, it still retains that chaotic, provocative and ultimately contrarian streak running through all of Hill’s work, both as a solo artist and as a band member/sticksman for hire.

Take opener ‘Memo to the Man’, which can’t help but draw comparison to contributor Greg Saunier’s dayjob, Deerhoof. There’s a bubblegum melodic sensibility lurking around somewhere, but Hill’s Jackson Pollock splatter approach to composition ultimately dominates. The result is a constantly shifting, chirping and jerking track: buzzsaw noise cuts in abruptly only to be replaced by the shimmering main riff, which is then undercut by bizarre drones and background yelps. The lasting impression is of someone attempting to write a pop song, but getting bored and writing several, before trying, Frankenstein-like, to bind them together.

Elsehwere, Hill tries his hand at hardcore on two breakneck, blood specked hardcore tracks with No Age. In fact ‘Total Recall’ is an impressive highlight, echoing Negative Approach if they’d found a distortion pedal. Dean and Randy’s gang vocals and sledgehammer riffage sits surprisingly perfectly on top of yet another clattering percussive performance. There are odd intermissions from the general breakneck pace of the album; fellow Diamond Watch Wrists member Guillermo Scott Herren (better known as Prefuse 73) adds some intercontinental glitch and grind fuzz to ‘Gross Sales’, but it only really slips to a halt on final chanted drone track ‘Second Life’.

Despite this newfound brevity and conciseness, it’s hard to feel that Face Tat represents a sudden, unheralded watershed moment for the Hella sticksman. The swooping siren synth that opens ‘Ex-Ravers’ reprises much of Hill’s work on ‘Astrological Straits’, and the characteristic chaotic, clanging percussive drops remain. It’s not so much that Hill has left behind his more experimental and wayward influences – more that he’s compressed and blended them into shorter servings.

Whether or not this makes for a more enjoyable listening experience is debateable: whilst Astrological Straits might not have been ‘easy listening’, the tracks were long enough and varied enough to provide relief from those pounding, crashing drums. On Face Tat, the chaos never stops: it’s akin to a musical interpretation of all the theme park rides in the world, taken one after the other. Granted, tracks like warped surf anthem ‘House of Hits’ might be as melodic as Hill has yet put to paper, but it’s still a deeply disarming and warped piece of work. To be blunt, you can’t imagine anyone else releasing something like this and getting away with it. Which is all part of the charm.