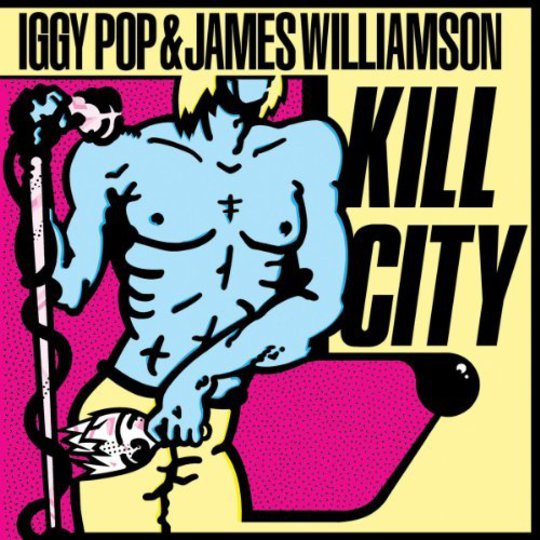 It's fair to say, that with forty years in showbusiness, everything Iggy Pop has done has been scrutinised to a fine point. The man has more backstory than Jesus, and there have been a few biographies written about him. Paul Trynka's 'Open Up and Bleed' is perhaps the best, most in-depth account on the life of Iggy Pop. It's a fascinating read from cover to cover, and gives a little extra perspective on his life from before the Stooges up to their semi-recent reformation. It also covers the recording of Kill City, Iggy's 'lost' album between the disaster that was the end of the Stooges the first time around and his peak period working with Bowie on The Idiot and Lust For Life. Originally recorded as a demo in stop start spurts as Pop was ferried by aerstwhile Stooges guitarist James Williamson from the psych ward to Jimmy Webb's home studio for vocal takes, Kill City really is the missing link between Raw Power and The Idiot.

Or rather, it would be if it hadn't been released already. The original recording was overdubbed and remixed by Williamson, long after he and Pop reappropriated the original tapes, and was roundly panned by critics after being released on Bomp at the same time that two infinitely superior Iggy albums were on the shelves. As such Kill City doesn't represent a hidden diamond lost in the sands of time. Instead it stands as more of a black mark against the names of both men, and that is why this re-release has significance to the average Iggy Pop fan. After the sterling work done on The Stooges reissues, the chance for audible improvement on the original recording is tantalising. Will shifting some of the sonic grime afford the album a new status after the public gets a chance to hear it as it should have been?

There's no escaping the psychotic dynamism of 'Kill City', a song about living fast and potentially dying young. When Iggy suggests that LA is a "loaded gun" and that you could end up "overdosed and on your knees", he's reading out what could have been the end of his life story. The riff is one of Williamson's very finest, too. As Iggy was burning out, Williamson was just burning, and here he nails down the kind of solo that most rock guitarists would give their eye teeth just to be able to play. And the mix is well and truly fixed too, with vocals and guitars prominent, but the separation between the rest of the rest of the instruments is noticeably improved from the thin sounding and tinny original.

'Sell Your Love', a Rolling Stones tribute is also definitely better, the sax work pulled away from the main body to provide depth instead of clutter, and the backing vocals are also far better defined. If I was a gambling man, I'd wager that Williamson had bad reviews ringing in his ears from the Seventies and had given improving the album some serious thought well before rejoining the Stooges. All speculation aside, there are improvements everywhere. 'No Sense Of Crime' is saved from the gutter and the savage percussive beating it took from stray bongos in the original mix, while 'I Got Nothin', a late era Stooges cast-off is given a boost by having the drums pushed up and the backing vocals taken down a touch. The song loses some of the sloppy brutality that the Stooges gave it live, and gets a bit more of a Rolling Stones makeover. In fact, Mick and Keith cast a long shadow over most of the record.

Working within the boundaries set by another (better) band like the Stones is a comfort but also a hindrance here, and highlights the lack of truly original, sharp songs actually recorded during the sessions. 'Consolation Prizes' is a throwaway Stonesy romp, and will please and infuriate in equal measure. 'Night Theme' and 'Night Theme (reprise)' are excellent spooky, spare instrumentals, but in total come in at two minutes 30 seconds. If you were to remove them from the tracklisting altogether you have nine tracks that run to about half an hour. If it weren't for their high quality, a cynic might suggest that they were padding, making the album look like it contained more material than it really did. There are a couple of old Stooges tracks in there, and the rest generally doesn't have the aggression of old, or the subtle verve of the later Bowie-era work.

'Johanna' is another Stooges chestnut, but is also the one instance where the new mix doesn't improve anything. Unless you really like cheesy Seveties sax poured over everything, in which case, this is the song for you. 'Beyond The Law' uses sax more sparingly, and works much better, with a bit more in the way of tempo and genuine defiance when Iggy screams out that "the real scene is out beyond the law". In balance, Kill City has never sounded better, and is about to be unleashed as it should have been at the time. Sadly, it's going to let everyone know that it, give or take a couple of highlights, was a stop-gap record all along. The mythos that surrounds the recording of Kill City may give it a little more interest and flavour for fans, but unless you're a die hard, this is one reissue that you can probably afford to miss.