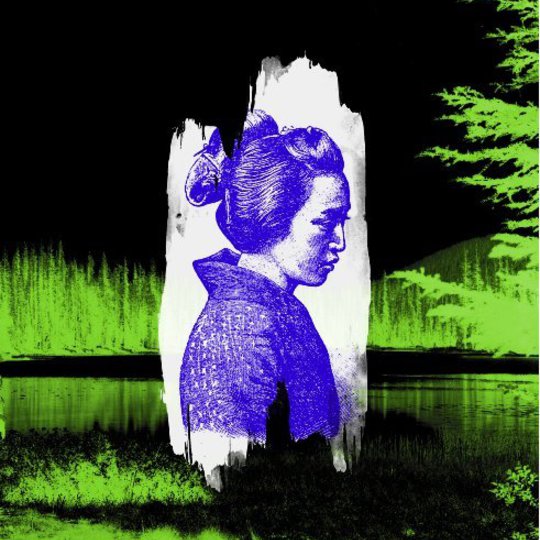 Listen closely enough, and it’s possible to detect subtle variations in the resonance of the world around you. Different terrains modulate the properties of sound: wind, whipping across moorland, spirits a voice away before it can even reach the ear; the soft, muted crunch of woodland; how a grassy natural amphitheatre almost imperceptibly raises the volume of spoken words. Wandering between these environments reveals a soundworld constantly in flux, never settling for long enough to become predictable. As Forest Swords, Matt Barnes treads similar paths, taking equal inspiration from dub’s studio trickery and the landscape of his home in the Wirral to create music that captures those shifts as they occur. Each track is a languid snapshot of a single moment in time, as though he’s able to pause the clock and cycle slowly through the stacked layers of the present.

In the months following its original release, through US lo-fi magicians Olde Engish Spelling Bee, his bewitching Dagger Paths has ever-so-slowly wormed its way into wider consciousness. Despite its quiet emergence as a six-track, vinyl-only curiosity on a tiny label, it sold out almost immediately. Since then, Barnes’ music has slowly trickled its way through the internet’s usual channels, gradually being discovered by new groups of people and in the process establishing itself as 2010’s most quietly affecting record: a true sleeper hit. This CD reissue by No Pain In Pop, which brings the original 12-inch together with its sister 7-inch Rattling Cage and a limited bonus disc of remixes and rarities, should ensure it only continues to grow in profile.

Upon its release Dagger Paths was almost inevitably filed alongside the backward-looking ranks of his OESB labelmates. And there are certainly parallels to be drawn between tracks like ‘Miarches’ and ‘Rattling Cage’ and the likes of Autre Ne Veut and James Ferraro. But Forest Swords’ music is far more spatial than it is temporal. Shedding the thin haze of nostalgia that peppers the hypnagogic pop phenomenon, he crafts landscapes that are entirely of now. Rather than remain content with abstract expression, his cover of Aaliyah’s ‘If Your Girl Only Knew’ (recast simply as ‘If Your Girl’) is almost overwhelmingly visual. Barnes’ imperfect vocal take, buried in mist and murk, is crisp and autumnal, stretching out a single second into a percussive eternity. His music certainly plays tricks with time but also operates defiantly outside its rigid boundaries - album highlight ‘Hjurt’ hangs in unbroken stasis for five blissful minutes. In that sense it achieves a druggy 5am lucidity despite its low fidelity, low tech gestation.

Dagger Paths’ upward trajectory, subtle, organic, expanding from tiny eddies and ripples to full-blown waves, is mirrored in – or perhaps, more accurately, mirrors – its contents. As simple as it is effective, Barnes’ signature technique is to construct aural illusions of vertiginous depth from layer upon layer of sparse instrumentation, all bound together with the sticky gum of reverb. It’s as if dub had first developed in the windswept, changeable expanses of the Wirral, rather than the sun-soaked warmth of Jamaica. When I interviewed him earlier this year he also cited Simon Reynolds’ seminal post-punk document Rip It Up And Start Again as an inspiration. That book’s legacy becomes increasingly clear while listening to his music: the principle of tearing apart everything that came before and rebuilding it in stark new shapes lies right at its heart.

Crucially though, instead of using reggae or punk as a basis from which to experiment, ‘Glory Gongs’ and ‘Hjurt’ take the crystalline, spidery guitar structures of post-punk and set them buoyant above cavernous low-end. Combined with scraps of sampled voice strewn across its surface, the result is a take on similar ideas of deconstruction but filtered through a modern lens. While not explicitly political, it’s strangely appropriate that, in keeping with the origins of post-punk, its arrival coincides with the sort of vicious governmental agenda not seen since the days of Thatcher.

Beneath its dense, layered appearance, Forest Swords’ music is deceptively simple. Listening closely, you can practically hear Barnes’ bedroom tightly enclosing the music: fingers scraping on frets, failed takes, fruitless nights spent bathed in a laptop’s glow. But what’s so remarkable about Dagger Paths is how it transcends the limitations of that space. Like another of the year’s finest records, Actress’ Splazsh, it refuses to remain trapped between four walls, instead reaching outward to absorb the peculiarities of the surrounding environment. Tantalisingly short but precociously fully formed, operating both within and totally apart from current trends, it’s like nothing else out there.