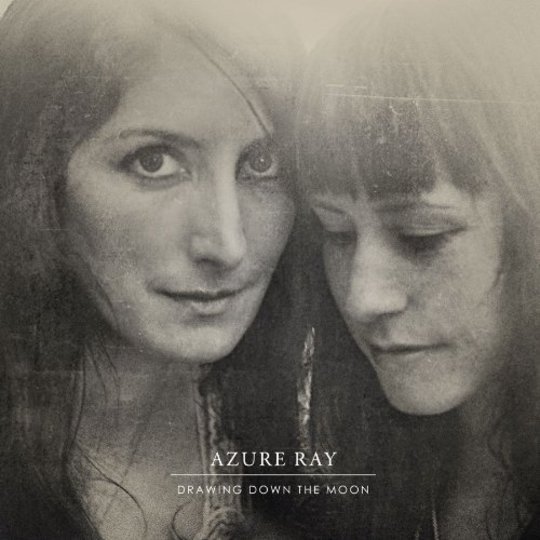 A full seven years have passed since Azure Ray last released an album, but fans of their distinctive, poised melodrama can rest easy: with Drawing Down The Moon showcasing their familiar charms and flaws, it’s like they’ve never been away. The charms are obvious. Orenda Fink and Maria Taylor’s voices are as blissful as ever, conspiring to form truly wondrous melodies and harmonies throughout. But while the vocals majestically soar, the rest of the album often struggles to reach the same heights.

Lead-off single ‘Don’t Leave My Mind’ sums things up in microcosm. Carried along by economical drum machine and electric organ, it’s a refreshingly spare arrangement, and fits the song’s simplicity well, allowing Fink and Taylor’s vocals to take centre stage. Of course, the end result is as pretty as anything, but yet it’s strangely unsatisfying, especially considering this is the album’s marquee 'pop' moment.

It’s a problem that plagues a good deal of the record. The haunted ‘Love And Permanence’ begins promisingly, but despite the dramatic electronic burblings and, yes, the immaculate vocals, the song runs its course without delivering a real pay-off. ‘Shouldn’t Have Loved’, meanwhile, has Fink and Taylor elegantly languishing over a jaunty brushed drumbeat, but falls some way short of either tousling the heartstrings or scratching that pop itch.

But to dismiss the album as a series of misfires really would be a little off the mark. ‘Silver Sorrow’ succeeds on aesthetics alone, its layers of vocal adornments recalling Cocteau Twins’ sublime Liz Fraser. But ‘Drawing Down The Moon’ also has its moments of quality songwriting too. ‘In The Fog’ is fantastic, the plaintive voices standing resolute amidst the soupy electronics and bursts of static. ‘On And On Again’ is even better, an example of Azure Ray at their emotionally-overwrought best, culminating in the exhausted plea “If I could give this a shot, could you?” Final blockbuster ‘Dancing Ghosts’, meanwhile, has Taylor apparently reflecting on her relationship with Conor Oberst, reprising her melodic contribution from the Bright Eyes track ‘Poison Oak’ to ask “Was I lost enough to believe in us?”

Drawing Down The Moon marks a welcome return for Azure Ray, and makes for an oftentimes exquisite listening experience. It’s just a shame that, when it comes to the songs themselves, much of the beauty is only skin deep.