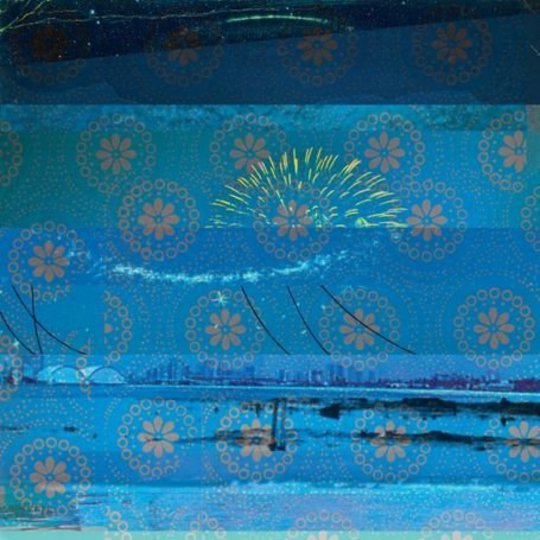 Gold Panda’s ‘Quitter’s Raga’ was one of last year’s most quietly enchanting little pieces of music. A lithe, smoky miniature that barely lasted the amount of time it had already taken to drop the needle on the 7-inch, it was pieced together from tiny snippets of an Indian raga scale, percussion twisted like tunnel vision and an almighty cloak of radio fuzz. Almost as soon as it began it was gone again, but it was remarkably adept at transporting the listener to somewhere distinctly ‘other’. Played on a rainy autumn day in Bristol it sent the mind careering off across the globe, in some two-minute long equivalent of a gap year spent getting wasted in bars across southeast Asia.

If that all sounds a little cutesy, throwaway or even student-y, it is to a certain extent, though that’s hardly to its detriment. His music brims with non-cynical excitement, and it’s tough not to get at least partially swept away in its naked sentiment. That said, while ‘Quitter’s Raga’ and the Miyamae EP were tantalising in their sheer brevity, there’s still a question mark hanging over the concept of a Gold Panda full length. His music is packed with subtle eddies and at times touches on the sublime, but can come across as frustratingly transient, like glistening smoke that drifts from a shisha before vanishing into thin air as it rapidly diffuses. In many ways those traits mirror his music’s gestation, inspired by a return to London life after time spent abroad studying in Japan, brimming with the sense of the temporary that weighs heavily upon that sort of existence. Over the course of an entire album the risk is that it loses its easy charm through lack of variety or sheer overexposure - even the most seasoned globetrotter is struck by the occasional yearning to find themselves back on the ground, footsteps echoing along well-trodden paths.

Lucky Shiner manages to avoid that problem – just - though it does display a tendency to blur into one, with few tracks along the way that immediately make their presence felt above the milieu. It’s admittedly not an unpleasant sensation, and the way it streams by above a measured house pulse evokes memories of long, hazy journeys and time spent abroad, away from the constant push and pull of British autumn. At its most predictable - though still undeniably, winningly pretty – Lucky Shiner comes across as a humid and exotic cousin of The Field’s frosty shimmer. ‘Snow & Taxis’ takes a similar sort of chord progression, buzzing with wistful, muted euphoria, and coils it around a syncopated snare pattern that betrays the influence of London’s emergent funky sound. And with its bubbling vocal sample buried just beneath the surface, ‘Vanilla Minus’ could almost sit alongside most of From Here We Go Sublime without breaking that record’s momentum too much.

Still, at his best Gold Panda manages to toe a fine line between the familiarity of home and the heady cocktail of anticipation and fear that accompanies a trip to an unknown place. It often sets up a tension that’s wonderfully difficult to unpick – ‘India Lately’ is particularly lovely, building from modest beginnings into something quite special, unashamedly heart-on-sleeve but better for it. The agitated skip and stutter of ‘Before We Talked’ is even better; alongside its languid counterpart ‘After We Talked’ it bookends the album’s softly evocative midsection, 15-odd minutes that becomes progressively more immersive with repeated listens. Whatever angle you examine it from, Lucky Shiner is an impressive statement, especially for a debut, and when Gold Panda lets the house beat sink into the background and experiments a little more with space and structure the results are gorgeous. That also proves to be its one flaw; too much of the record seems content to simply drift by prettily, without making demands on the listener’s attention. It’s those moments when he plays havoc with the basic template, literally tearing his music apart at the seams, that a real sense of wonder shines through the fog.