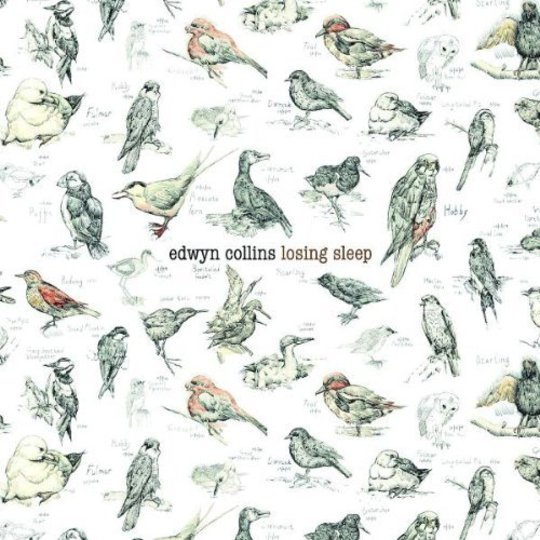 Just before writing this review, I was wondering about the extent the title Losing Sleep should be placed in the context of the two cerebral hemorrhages that Edwyn Collins suffered in February 2005. To ignore it in an effort to focus purely on the music would be impossible and disingenuous, but equally, allowing the past five years to dominate in all discussions of the music Collins now makes could easily tread precariously close to the two words that Collins’ wife and manager, Grace Maxwell, was so happy to avoid when her husband first started giving interviews to music magazines and newspapers again in 2007. ‘No wallowing, no patronising’. Ultimately, exactly what Edwyn Collins has gone through isn’t my story to tell and any compressed five-year biography retraced here wouldn’t do it justice, so If anyone were in need of a more detailed context they should seek out Maxwell’s book Falling and Laughing: The Restoration of Edwyn Collins or the equally affecting BBC Scotland film that documents Collins’s progress from 2007 onwards, Edwyn Collins: Home Again. Instead, I’ve just decided to steal Paul Morley’s effortlessly accurate summation of how best to comprehend the new phase in this artist’s career, written after watching Collins perform a show in 2008. ‘You can’t avoid the reality of Collins’s condition, but it doesn’t get in the way of what he really wants us to think about. His songs’. And the 12 tracks of elegant and aching soul-pop sucker-punches that make up Losing Sleep demand your thought.

Lead single and album opener ‘Losing Sleep’ is all northern soul swagger and stomp, tearing away with an itchy drumbeat that gradually mirrors the unrest of the lyrics, in turn transforming its potentially upbeat gait into a doggedly insistent rhythm that nags and gnaws like recurring thoughts taking root in the early hours. ‘What Is My Role’ is quick on its heels with a brooding ‘Shot By Both Sides’ (or ‘Lipstick’, depending on your disposition) style riff, jagged and to the point, Collins curtly telling us, "sometimes I’m up, sometimes I’m down". Despite being an album that appears to be made up of such personal and reflective lyrical themes, the tunes themselves mostly rattle by in a flash with less regard for steady contemplation. ‘Come Today, Come Tomorrow’ is a shimmering and jangling shout of defiance that steadily builds to a rousing conclusion, but the album highlight comes with ‘In Your Eyes’, four minutes of exquisite, glistening new-wave pop that’s almost impossibly wistful and yearning, Collins deciding "someday soon, I’ll leave this city".

The pace eventually slows, however, with the final two songs. ‘All My Days’ sounds like the sort of tender lament that that recalls Bragg at his best, and then there is the track that closes the album, ‘Searching For The Truth’. Its slight and self-effacing nature, an unfussy acoustic strum with a small flourish of harmonica at the close, belies the great significance it must hold for Edwyn Collins and those around him, seeing as its words were the first original lyrics to be sung after his operation in August 2005. It seems fitting that they should close this first album of completely new material, Collins sweetly crooning "we’ll get there, in the end".