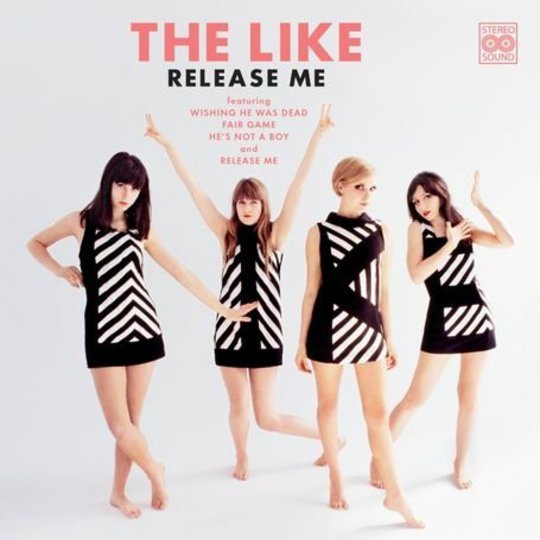 It’s like, they’re this totally hot girl band, who have family that, like, work in the record industry and got them hooked up with a deal when they were, like, still in their senior year. They released this one record years ago that was kinda, like, ok in a lame ‘hear my teenage angst’ yawn kinda way. But, then they met this, like, producer called Martin Ronson or something, and have this new record coming out that has this totally Sixties vibe going. And, they have an awesome twiggy look that Vogue’s completely crushing on now.

It’s easy to dismiss The Like on grounds of the well-connected loins they’ve sprung from, their fashionista connections and good looks. It’s not helped by the fact their latest album, Release Me, is produced by professional nob and knob twiddler Mark Ronson, and that they launched this album with a Zac Posen Target campaign shot by Gia Coppola of the Coppola dynasty. But, it seems too easy to pull the trigger on a loaded gun that’s already been put to the head of so many all female groups. So, we won’t.

In the five year’s since the band’s grunge lite debut Are You Thinking What I’m Thinking, there’s been a near vow of silence, with many assuming the group had disbanded. Following its release, the band did record a follow-up in 2007 only to have it shelved by their record label, Geffen. Bassist Charlotte Froom then subsequently left the group to go back to school to pursue a career (a very rock'n'roll career in clinical psychology) leaving Z Berg and Tennessee Thomas alone with no album, no bassist and no label. It looked like it was over, until Tennesee bumped into Mark Ronson in London a couple of years ago. He took them into the studio for two weeks re-recording the original material shelved by Geffen. Z and Tennesse also recruited two new members: bassist Laena Geronimo and organist, Annie Monroe, to make them a quartet.

Release Me is reimagines the Shangri-las as if they were backed The Kinks: lip gloss smothered melodies puckering up to throbbing hard and heavy beats. It’s a sound the band are keen to stress has always been in their record cabinets; regularly paying homage in interviews to these bands along with The Zombies, The Beatles and Dusty Springfield. It's an influence that they say got lost on their over-produced debut. Release Me does have similarities to their debut with Z berg’s familial husked vocals, lyrical witticisms and ear for a catchy melody, but this really is a whole different band.

Opening track ‘Wishing He Was Dead’ starts with a fiercely defiant riff and skipping beat. Despite only being a quartet for a short while, the band play snugly together. Geronimo’s bass is always hard and heavy, having the same grimy edge as the Stones' ‘Under My Thumb' on 'In The End'. The addition of organist Monroe gels the band together as a whole and leads over Z’s guitar on most of the tracks.

Z’s now seriously husky and rasped vocals dance over the beats with accompaniment from cooed and shouted backing vocals from Geronimo. Z quite blatantly takes her vocal cues from the defiant snarl of the Shangri-Las, even imitating their spoken word style on the close of ‘Wishing He Was Dead’.

Written about 'sheer heartbreak, desperation, anger, ennui', the songs, although taking their stylings and melodies from the girl groups of the Sixties, don’t conform to the Carole King school of songwriting: there’s no ‘He Hit Me (And It Felt Like A Kiss)’ with tracks like, ‘Wishing He was Dead’ full of bile and vengeance, as Z purrs: “I just won’t forgive and forget and when I’m through with him, he’ll be wishing he was dead”. Z, with lyrical wit and a knowing wink conveys life when you’re young in the 21st century in cleverly crafted narrative: ‘Walk Of Shame’ recalls a night we’ve all had as she sings "I’ve got 25 missed calls on my phone, why don’t you leave me alone, so I can brutalise myself on my own" juxtaposed to a jaunty beat.

Hate or, well... hate Mark Ronson, he’s actually offered a nice, clean production job without a faux-Motown trumpet in sight. There’s space in each track with the Spector tradition of the rhythm being the main feature clearly obeyed. ‘Trouble In Paradise’ flies along like a lost Bond theme tune, until it cuts out into a solo drum beat to add tension. Stand-out track, ‘Don’t Make A Sound’, as it goes from Zombie’s cool to on the brink nerve tingling desperation with a simple drum break.

The record only suffers from being religiously formulaic with every familial fuzzed riff, heavy beat and rasped vocal; by ‘Catch Me If You Can’ you can start to feel like you’ve been here before. The cover of the Isley Brothers, ‘Why When The Love Is Gone’ after ‘Don’t Make A Sound’ seems like sloppily tagged on attempt to be shown that the group’s influences are genuine. Otherwise, Release Me is a perfectly produced pop gem with all substance and a lot of style.